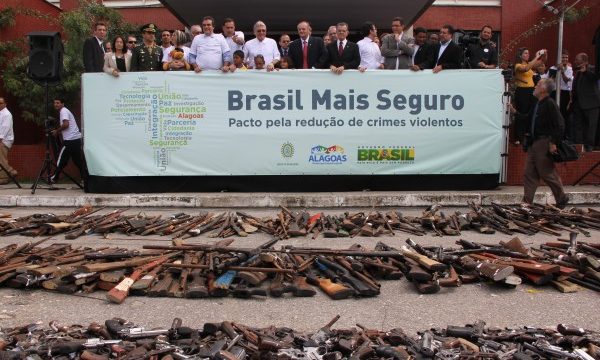 In late June of 2012, the Brazilian Federal government, in conjunction with the State government of Alagoas, launched the Safer Brazil Program (Programa Brasil Mais Seguro) which aimed at lowering violent crime rates in the country. For the pilot program, the Northeastern state of Alagoas was chosen due to the extremely high rates of homicide there. The government’s own data showed a 420% increase in the murder rate over a period of three decades, arriving at 60 homicides per 100 thousand residents.

The program looked at three actionable areas for improvement: the investigation of violent crimes; an increase in patrolling and community outreach; and gun control. Within one month of it kicking off, positive results were already starting to come in.

With an initial investment of R$25 million by the Federal government, earmarked specifically for Alagoas, the local and State police were able to get new equipment, receive more advanced training and install fixed, as well as mobile, video-monitoring bases. The State government, for its part, created job openings with both the civil and military police, opened a new department to deal specifically with homicides and provided bonuses to officers that apprehended weapons.

In just 6 months, Brasil Mais Seguro was able to lower the homicide rate by a whopping 20% (the largest drop in history, country-wide) in Alagoas, and increased the identification of criminals (which found that 80% of them already had rap sheets).

In addition to the main program, a sub-initiative has been launched under it, called Juventude Viva. The new plan is “geared towards youth aged 15 to 29, and hopes to reduce vunerability and deconstruct the culture of violence associated the age range, preventing violence and offering opportunities for social development.”

And if that’s not enough, in light of the sucess of Brasil Mais Seguro, it has also been enacted in the nearby state of Paraíba, with neighboring Rio Grande do Norte likely to follow suit.

I’ve really been enjoying the classes and I’m learning a lot. The classes have motivated me to learn more and more! This is my first time taking classes via Skype – and I’m enjoying the convenience an… END_OF_DOCUMENT_TOKEN_TO_BE_REPLACED

Street Smart Brazil has excellent and flexible training. It was able to meet our needs for ongoing Portuguese study. They also are constantly evolving their offerings which keep me involved and learn… END_OF_DOCUMENT_TOKEN_TO_BE_REPLACED

Streetsmart Brazil helped me to attain a Celpe Bras proficiency rating of advanced intermediate. Not only have I improved my reading and writing skills, I can speak more fluently on a wide range of t… END_OF_DOCUMENT_TOKEN_TO_BE_REPLACED