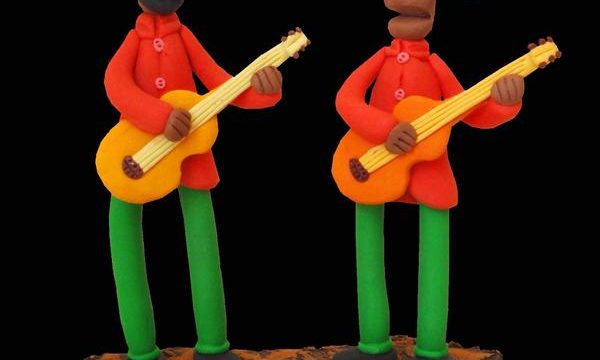 I grew up in the mid-90’s on a healthy dose of hip-hop and rap, mostly listening to the likes of Tupac and Notorious Big. Between them and their respective territories, there was always talk of a duel of sorts and in their lyrics, they would often diss the hip-hop scene on the opposing coast. Hearing the word duel reminds me less of two people musically conversing with each other and more of the kind of duel one might see in an old Western film. In fact, both rappers I mentioned happened to have lost their lives to gun violence.

Here in Brazil, hip-hop culture was adopted fairly quickly but the lyrical duel is something that already existed in a Brazilian folkloric tradition called Repente (pronounced heh-pen-chee). The style itself is a throwback to the composer-performers, known as troubadours, of the Middle Ages who sang songs ranging from courtly love to sassy satire. The modern day version made popular in Brazil naturally selected the satirical side and is more concentrated on performing than composing. The gist of every jest, and the main differentiator between the repentista and the troubadour of centuries past, is that all songs rely heavily on the spur-of-the-moment. It is from such improvisation that the repente takes its name, since “de repente” translates into English as “suddenly”.

More popular in the Northeast than other regions, the repentista comes in twos (a duo) and can be found mainly on popular beaches or city plazas where they hawk their lyrical wares to unsuspecting passersby. Often accompanied by old guitars and new rhymes, they play catchy, simple tunes and sing about varied themes. While one plays the guitar or the tamborine, the other improvises, until they switch roles at the end of every verse.

If the repentista is particularly skilled in rhyme and song, crowds even form around them. I once witnesses a similar scene in São Paulo’s largest city park one Sunday morning where two repentistas began to poke light-hearted fun of people walking by. This made others stop and listen and risk becoming the subject of the next verse. In the end, the two men dressed like cowboys held out their hats for tips and sold their CDs to the onlookers. Despite the fact that oral literature is centuries old, I felt like I had never heard anything of the sort in my life.

Looking back, it’s not too far-fetched to connect the tradition of ad-libbing to the beginnings of hip-hop in the US. While hip-hop has become a force to reckon with, with its own cultural norms and behaviors, the repente seems pleasantly “stuck in the past”. Similar to the night-time mimes that follow tourists down the cobblestone streets of Cartagena, Colombia, imitating their movements, the repentistas are entertainers in the best sense, almost invariably emptying pockets of spare money and filling the air with sudden laughter.

For a cool post on repente, see The Good Blood.
Otherwise, check out the video below to get an idea of what repente is about.

I really enjoyed the lessons with my instructor; there was not a single moment of boredom throughout any of the lessons. Initially, I had asked my teacher to help me work on the subjunctive, thinking … END_OF_DOCUMENT_TOKEN_TO_BE_REPLACED

Last Friday was my first job interview conducted in Portuguese. I was scared to death walking in the place, thinking I was going to have to speak in English for a lot of the time. That is not what hap… END_OF_DOCUMENT_TOKEN_TO_BE_REPLACED

I can highly recommend learning Portuguese with Street Smart Brazil. I have very good tutoring. My teacher is competent and nice. Her classes are great and she challenges me every single time in a ver… END_OF_DOCUMENT_TOKEN_TO_BE_REPLACED