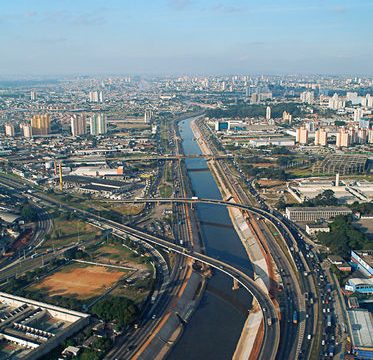 The Tietê River cuts through most of the state of São Paulo. It’s name in Tupi means “true waters”, but before it first appeared on a map in the mid-18th century, it was known by Amerindians as Anhembi (after a South American partridge). The river itself is said to be ten to fifteen million years old and has been used in the past by Amerindians, Bandeirantes (slave-hunters, and later miners, of the 16th-18th centuries), and clergymen. Historically, the Tietê has been used and abused more than it has been merely traversed.

During the 18th century, it was used for mining exploration and sugar production, with the color of the water being altered and the margins of the river being deforested. By the early 20th century, a large number of enterprises were regularly tossing their waste into the part of the river around São Paulo’s capital until it reached its current state. Today, it’s known for its bad smell, sewage, and flies but if the São Paulo’s current governor has his way, by 2015 the Tietê will be nice-smelling enough to offer boat tours to tourists. The near-century of waste-dumping caused the river to lose all its oxygen, though oxidation would be a later step in the process.

Cleaning up the Tietê isn’t a novel idea, as the government, together with many civil organizations, have been working on the Project Tietê since the early 1990s. The governor who initially got the ball rolling, Luiz Antônio Fleury Filho, said by the end of his mandate in 1995, you’d be able to drink a cup of water straight from the Tietê. His estimate was a few decades off, unfortunately. The project, currently in its third phase, spans over 500 public works (only half of the total for this phase). The cost from the start of the third phase in 2009 until now? A cool US$1.8 billion.

(The past is the future?)

I’ve argued before on my blog that the more touristic “calling cards” that São Paulo gets, the better off it will be. Most foreigners passing through the city only find out about the basics, such as the city’s size and perhaps the fact that it offers a lot in terms of nightlife and gastronomy. There’s definitely more to the city but the current attractions are smaller in size and tend to be relegated to the realm of the insider, or rather, the Paulistano.

As for if the current governor will have his way, I can say this: his party has been in control of São Paulo politics for the past 17 years (not to mention all the past presidents have hailed from São Paulo for the past 20 years straight). Here’s to hoping the World Cup and Olympics are a true cause for change.

Street Smart Brazil and their instructors have proven themselves to be patient, smart, helpful, and true professionals in their craft. Learning a new language for me has been one of the most challen… END_OF_DOCUMENT_TOKEN_TO_BE_REPLACED

My classes are awesome – I’m learning A LOT and it’s fun, convenient, and enjoyable. My instructor is a wonderful teacher, and she gives me a nice balance of grammar and oral & written comprehension.… END_OF_DOCUMENT_TOKEN_TO_BE_REPLACED

Especially if you are in Rio de Janeiro, I highly recommend this class! You don´t have to fight traffic to get to class, your teacher will show up on time, you can make your own schedule, and the ma… END_OF_DOCUMENT_TOKEN_TO_BE_REPLACED

Choosing to take classes at Street Smart Brazil was the best decision that I’ve made since deciding to learn Portuguese.  My classes are going very well. Every week my instructor gives me more challe… END_OF_DOCUMENT_TOKEN_TO_BE_REPLACED