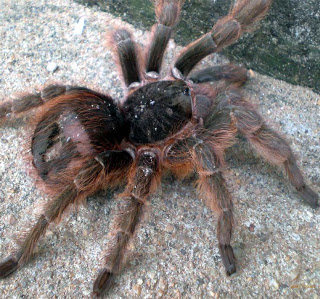 Being that we just celebrated Halloween, I thought it’d be a good time to introduce you to the Brazilian tarântula, known in Brazil as the caranguejeira (after caranguejo, or crab, due to its size and similarity). Out of 900 species of tarântulas on the planet, 300 of them are Brazilian. Of those 300 species come 11 families, 10 of which are native to the Amazon jungle.

While the caranguejeiras are venemous, they are also shy and generally avoid humans. Their favorite meals tend to be around their own size, so that means small birds and various types of rodents and reptiles. Despite having a huge spider in my house last night, I’m happy to say I’ve never seen a “crab-spider”, even when I lived in the Amazon.

With 300 species of tarântulas coming from Brazil, one might think they were all once from Brazil, too. In fact, the name tarântula used to refer to the wolf spider and it was connected to the town of Taranto in southern Italy. It was believed long ago that, when bitten, one should do the tarantela, a dance to rid oneself of the venom.

As for me, I’d rather move my legs before encountering one…that is, in the other direction.

42 Postcard-Like Beaches in One City

Brazilian Culture: Cacuriá – When you think the party is over in Brazil

I really like studying with Street Smart Brazil. The quality of instruction and materials that Street Smart Brazil provides exceeds any I have received elsewhere. I actually look forward to it every w… END_OF_DOCUMENT_TOKEN_TO_BE_REPLACED

I have been using Street Smart Brazil for over two years now. I am pleased with my development in Brazilian Portuguese. I have had opportunities to use Portuguese on my job and intend to create more … END_OF_DOCUMENT_TOKEN_TO_BE_REPLACED

I’ve been extremely happy with my classes through your program. My instructor is great and very good at formulating lessons which are challenging but also accessible for a beginner like me. She’s also… END_OF_DOCUMENT_TOKEN_TO_BE_REPLACED