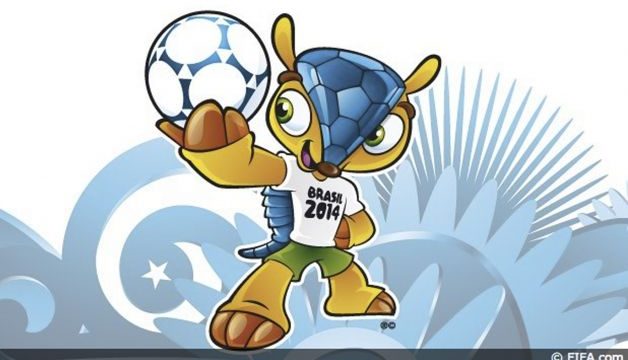 With the 2014 World Cup a little over a year away, official news on the event keeps trickling in. As of this last week, two items have caught the attention of the blogosphere and soccer fans, mainly the official posters for each hosting city and the official name for the mascot.

As for the mascot, it’s an armadillo which was just introduced to the public this September. Yesterday, via popular vote, the mascot finally received an official name: Fuleco. Winning out over two other possibilities, Zuzeco (azul & ecologia, or blue and ecology) and Amijubi (amizade & jubilo, or friendship and joy), the name Fuleco, with almost 50% of the votes, reflects a combination of two words in Portuguese, namely “futebol” (football) and “ecologia” (ecology).

Also to make its debut was the official posters for each hosting city. At first they were leaked but, shortly after, the announcement came from FIFA. Below is the Rio de Janeiro version (the full set can be found here) where each layer depicts a different aspect of the city, among them the beach, the sea, the mountains, Sugarloaf, and the sky.

After studying abroad and living in Brazil I use Street Smart Brazil to keep up my Brazilian Portuguese. It is not just a tutoring service but a community. Constantly keeping it fresh with new ways o… END_OF_DOCUMENT_TOKEN_TO_BE_REPLACED

The quality of the instruction is outstanding. The instructors are flexible to schedule classes in times which are convenient. Being able to use SKYPE for face to face without traveling place to plac… END_OF_DOCUMENT_TOKEN_TO_BE_REPLACED

I can highly recommend learning Portuguese with Street Smart Brazil. I have very good tutoring. My teacher is competent and nice. Her classes are great and she challenges me every single time in a ver… END_OF_DOCUMENT_TOKEN_TO_BE_REPLACED