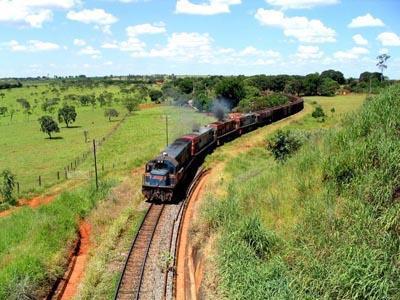 From their artisan cheese to their coffee and cachaça, Mineiros (residents of Minas Gerais) are well-known throughout Brazil for their food and drink. Their habits extend to not only what goes into their mouth, but what comes out of it. Let’s take a little look at two terms that Mineiros made famous: uai and trem.

There are three explanations for “uai”. The first says it derives from the 1800’s when the English built the railways in Minas, though the idea that Brits frequently said “why” as a catchphrase just doesn’t add up. The second explanation says that at the time of the Mineiro Uprising, the way to enter a conspirator’s hideout was via three knocks and the word UAI, which meant Union, Love and Independence (União, Amor e Independência). The last and, what I consider to be the most likely, is that “uai” is just a mutation of the common Paulista exclamation, “ué”.

An uncomplicated explanation of the term would simply be, “uai é uai, uai!” Agreed, uai is uai…unless, of course, you happen to be an English teacher in Minas Gerais, never knowing if your students are asking “why?” or saying “uai”.

Together with “uai”, the word “trem” (train) is frequently used by people from Minas. The origin is said to be connected, once more, with the era of the construction of the railways in the state. Being that a locomotive train was completely new to most Mineiros, they began to associate them with vehicles that transported their goods. Eventually, the word was used more to speak of the goods and objects the train carried and not solely the railroad cars themselves. In this sense, it is easy to imagine how “trem” came to signify any and every object, despite if it were being transported on a train or not.

As to the question of why Mineiros never miss the train, the answer is they never miss it because they always take it with them wherever they go!

I really like studying with Street Smart Brazil. The quality of instruction and materials that Street Smart Brazil provides exceeds any I have received elsewhere. I actually look forward to it every w… END_OF_DOCUMENT_TOKEN_TO_BE_REPLACED

I am really enjoying my lessons. My teacher is so patient with me which really puts my nerves at ease as I struggle a lot with confidence. I feel already more and more comfortable and confident speaki… END_OF_DOCUMENT_TOKEN_TO_BE_REPLACED

A fantastic way to learn rapidly while having fun.  I took two sets of classes with Street Smart Brazil and was really impressed with the quality of teaching; from the informative handouts to the sch… END_OF_DOCUMENT_TOKEN_TO_BE_REPLACED