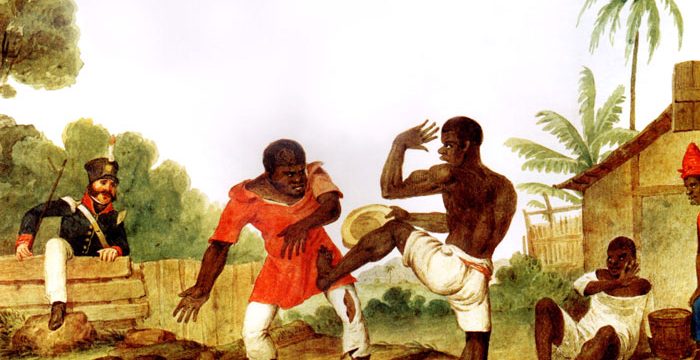 Between 1890, after the proclamation of the Republic of Brazil, and the final years of the 1920’s, capoeira references could be found, not in cultural literature of the time, but in the Penal Code of the Republic. The name capoeira itself became a pejorative term applied to vagrants, thieves and undesirables, but let’s return to this theme later while we take a look at the possible etymologies of the word.

The word capoeira was registered for the first time in 1712 by Rafael Bluteau in a dictionary he made called “Portuguese and Latin Vocabulary”, though its exact etymology is unknown. Several theories exist, the first of which was proposed by Brazilian author José de Alencar in his novel Iracema when he suggested that “capoeira” is Tupi for “caa-apuam-era” (a small, virgin forest). Another Brazilian lexicographer’s theory was that the word was connected to the name of a small partridge bird and the distinct way the male would defend his territory.

Yet another theory comes from author Brasil Gerson who believed capoeira referred to large baskets for saving wood and carrying chickens which slaves would transport to the marketplace. During their breaks, they would enjoy themselves by “jogando capoeira” (jogar meaning both play and throw). In much the way that the –eiro in brasileiro is associated with a profession (those who transported brasil-wood), the name of the big baskets may have been passed onto those who transported them.

While all these possible explanations are good and interesting, the most likely scenario for the origin of the word is that it’s simply a mixture of these theories. In the same way we use familiar, yet opposing phrases for just about any situation that requires a solution (“two heads are better than one”, but also, “there are too many cooks in the kitchen”), each possible explanation for the etymology of capoeira could very well have been popularly believed notions among different social groups. We have to remember, though, that these were tumultuous times for slaves in Brazil and just like the “-eiro in brasileiro” example, perhaps the slaves sought freedom upon escape in the small forested areas the Amerindians called capoeiras, and thus the slaves took the name of the areas they typically hid in.

The resistance of the maroon communities along the northeastern coast of Brazil in the 18th century showed just how important capoeira was. As the Dutch invaded, thousands of slaves took advantage of the confusion and escaped their masters. They formed groups called “maltas” in order to defend themselves and their territory with capoeira.

Rio de Janeiro also played an important role in capoeira’s history as most slaves in Brazil resided either there or in Bahia. The Calabouço prison, located in a military installation at the bottom of the Castelo hill in front of Guanabara bay, was the landing place for any slave that misbehaved or was thought to have misbehaved. As per an agreement between the State and the slave owners, any slave could be brought there to receive a “corrective whipping” of 100 lashes for the price of 160 réis. Prison records from 1857, for example, show that 80 slaves were jailed that year for “capoeira” while only 30 were jailed for running away. A few years later, in 1862, the capoeira-related arrests totaled 404. Eventually, what may have been considered a suspicious reason for arrest became a nationwide law signed by Brazilian president Deodoro da Fonseca.

The 18th chapter of the Brazilian Penal Code of 1890 deals with the subject of “Vagabonds and Capoeiras”. Under the 487th Decree (Article 402), one can find the following:

“Decrees of the Provisional Government
Art. 402. Performing, on the streets and in public plazas, exercises of agility and bodily skill known by the denomination capoeiragem: to attack quickly, with weapons or instruments capable of producing bodily lesions, provoking commotions or disorder, threatening a specific or unspecific person, or instilling fear of harm: Penalty — sentencing to a jail cell for two to six months.”

(Art. 403. states that if a foreigner is caught doing capoeira, they will be deported after serving jail term.)

Something that may have contributed to the criminalization of capoeira is the “malandragem“, which refers to trickery, malice or deceit. As a martial art, being able to trick one’s opponent can be a matter of life and death, so if a slave could make a fight seem like a dance, that could have been quite advantageous when viewed by, or enacted against, their masters. In a way, it was the darker sense of malandragem, as seen by those in power, that led to capoeira being criminalized. The lighter malandragem that existed within the game, among players, was just one of the intrinsic values that eventually helped in giving capoeira a better name.

In the late 1920’s, times were changing and one man took notice. His name was Manuel dos Reis Machado (better known as Mestre Bimba) and by making capoeira a sport that offered all of the training and discipline that any other athletic endeavor required, he uplifted the game and gave those who played it something to be proud of.

Mestre Bimba succeeded in getting the ban lifted after he performed for the governor of Bahia and he went on to open the first capoeira school in 1932 in Salvador da Bahia where he taught Capoeira Regional. In making students wear white and earn their skill level, in the form of a belt, Mestre Bima gave capoeira a wider appeal with the public and thereby demarginalized its practice. Today, he is still spoken about with a mix of respect and emotion by the many students he taught. It could be said that our modern concept of capoeira, and the fact that it is practiced in over 150 countries on 5 continents, is because of him.

Capoeira: Check out this Interactive Picture with Info and Videos

I really like studying with Street Smart Brazil. The quality of instruction and materials that Street Smart Brazil provides exceeds any I have received elsewhere. I actually look forward to it every w… END_OF_DOCUMENT_TOKEN_TO_BE_REPLACED

I am really enjoying my lessons. My teacher is so patient with me which really puts my nerves at ease as I struggle a lot with confidence. I feel already more and more comfortable and confident speaki… END_OF_DOCUMENT_TOKEN_TO_BE_REPLACED

A fantastic way to learn rapidly while having fun.  I took two sets of classes with Street Smart Brazil and was really impressed with the quality of teaching; from the informative handouts to the sch… END_OF_DOCUMENT_TOKEN_TO_BE_REPLACED