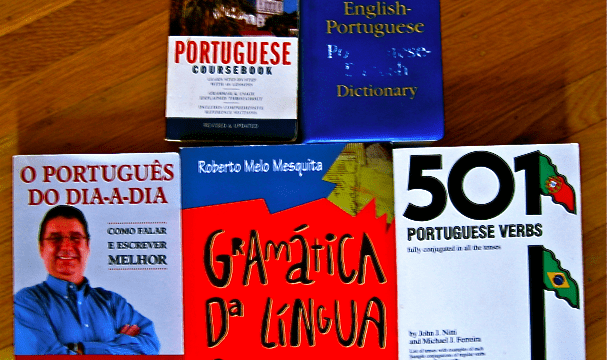 (some of the books I went through)

I read technology news every morning and this morning I read about why Google wanted to buy local coupon site GroupOn. The woman interviewed said, for Google, it’s much easier to buy into a market than to build up from nothing because with the former, you get a team of people who know what they’re doing and they already understand the market. In effect, paying for something saves time. It got me thinking about some of the things I wish I had not done alone and it turns out that learning Portuguese is one of those things. Sure, some people are impressed when they hear that I learned it on my own but I wonder if that is worth the fact that I probably added on a few years to my goal of reaching fluency by doing it the way I did.

I’m not a believer in the notion that one language can be easy to learn while another can be hard. Some folks even say one romance language can be learned more quickly than another. I beg to differ. All major languages require learning vocabulary and grammar rules, sounds and accents as well as formal and informal speech. On top of that, one needs to have determination, an ability to memorize and the will to be consistent. For these reasons, most of us know how hard it can be to learn Portuguese but also how satisfying every small victory feels, whether it is achieved alone or through someone who is able to give you a well-rounded learning experience.

The road I chose was lop-sided and lengthy since my teacher was myself, nudged along by a stubbornness to really be able to understand Brazil, its people and its culture. Several years ago, I didn’t want to just be a linguistic tourist in the land of the Portuguese language, I wanted to live there. Despite the fact that my first two attempts to actually reside (and more importantly, remain) in Brazil were not successful, I still will myself to live in a world of cedilhas and diphthongs, of half-eaten words and tricky verbs. Even when there’s no one to share a spare interjection with, I end up thinking it anyways.

While I fear I cannot come close to the charm of Olavo Bilac’s poetic description of Portuguese (a última flor do Lácio, inculta e bela: the last flower of Latium, wild and beautiful), I do have my own take on its allure. To me, Portuguese has always been a language of rounded words, the kind that should feel at home in the mouth of the one who speaks it. Being as sonorous and full-bodied as it is, I find myself wanting to always know more and be better.

Seven years passed before I considered myself to be fluent and for at least half of the time, I was hitting the books daily, even when I felt like I couldn’t do it anymore. Part of me would think, “I’ll do it tomorrow” but the other part replied, “No, you do it now!” Needless to say, the latter part won out and I soon found myself able to read magazines, newspapers and novels with an ever-higher degree of difficulty.

The price of admission for finally learning written Portuguese was that I had let my spoken Portuguese remain pretty much non-existent on account of not having a real teacher. I would listen in on conversations while I hung out with Brazilian expats but their unforced Portuguese sounded to me like one long word. Not being confident enough in my ability to carry on a conversation, even though the foundation was there in my head, I resigned myself to trying to pick out individual words. As the months continued, I started to be able to catch on to the moment when one word would end and another would begin, but by that time, the current conversation I was listening to was either over or on another subject.

There were times when I’d join in, ready to take a linguistic beating if need be. The results were limited but necessary. Pushing boundaries in language-learning is an important part of the process, even if you sometimes push too far. Of course, no one will ever hear me confirm this, but there may have possibly been a few forced laughs and nods of the head when in fact I didn’t get the joke or the idea at hand. Yes, there may have been an “é, né“, an “ah, tá” or a “…tendi” when perhaps I should have said I didn’t understand. It’s hard to know which choice would have been best but I just chalked it up to growing pains.

One choice I’ve always been happy with is when, around 2002, I first picked up a Portuguese-language learning book. All the time in between didn’t turn me into Euclides da Cunha because I still make small intermediate-level mistakes. There’s also more to learn on the advanced side but I’m generally satisfied with how much I’ve learned and to what degree I can navigate a conversation. The one thing that hasn’t changed in all these years is the fact that I still have the same desire for the language. There isn’t a day that goes by that I don’t either listen to, read, write or speak Portuguese. If that’s not love, I don’t know what is.

The quality of the instruction is outstanding. The instructors are flexible to schedule classes in times which are convenient. Being able to use SKYPE for face to face without traveling place to plac… END_OF_DOCUMENT_TOKEN_TO_BE_REPLACED

Learning a new language can be one of the most challenging things you can do. The individualized and wholly personal tact of teaching at Street Smart Brazil makes it a challenge that you will want to … END_OF_DOCUMENT_TOKEN_TO_BE_REPLACED

I’ve been extremely happy with my classes through your program. My instructor is great and very good at formulating lessons which are challenging but also accessible for a beginner like me. She’s also… END_OF_DOCUMENT_TOKEN_TO_BE_REPLACED