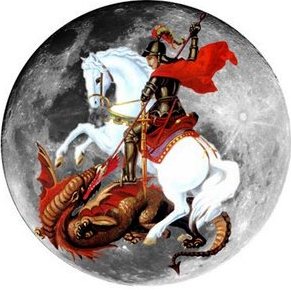 Our translated lyrics this week are about São Jorge = St. George.  The song is performed by Brazilian band Metá Metá. You can listen to the song in episode 319 of the Caipirinha Appreciation Sociey podcast. And remember to download your translated lyrics below.

São Jorge is a highly celebrated saint in several parts of the world. In Brazil, São Jorge is equally celebrated by both Catholics and followers of Afro-Brazilian religions who know him as Oxossim or Ogum. The traditional legends portray São Jorge on his horse holding his sword and slaying dragons to save the princess. Afro-Brazilian tradition says that the spots we see on the moon are the miraculous saint on his horse holding his sword ready to defend those who seek his protection. I personally love this legend.

São Jorge has been sung by many Brazilian artists. Examples of popular songs that praise the saint are Jorge da Capadócia, by Jorge Ben, and Ogum, by Zeca Pagodinho. The videos are below.

Luciana Lage founded Street Smart Brazil drawing on her passion for Brazilian Portuguese language and culture. Luciana has also taught Portuguese at University of California, Berkeley, and currently teaches at the University of San Francisco.

The group classes have been fantastic! The class is a perfect blend of fun and challenging.

Learning a new language can be one of the most challenging things you can do. The individualized and wholly personal tact of teaching at Street Smart Brazil makes it a challenge that you will want to … END_OF_DOCUMENT_TOKEN_TO_BE_REPLACED

Street Smart Brazil impressed me with the structure and outgoing personalities! I was able to learn the language 2 months before I went to Brazil and I can say it was because of Street Smart Brazil. … END_OF_DOCUMENT_TOKEN_TO_BE_REPLACED

Street Smart Brazil has excellent and flexible training. It was able to meet our needs for ongoing Portuguese study. They also are constantly evolving their offerings which keep me involved and learn… END_OF_DOCUMENT_TOKEN_TO_BE_REPLACED