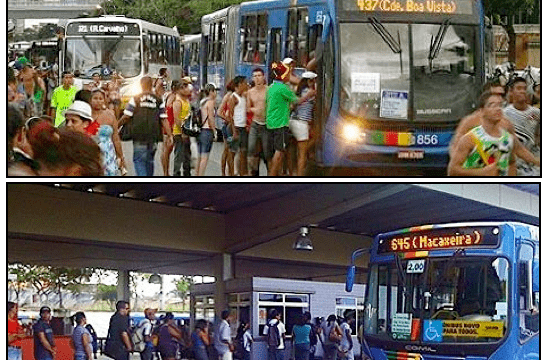 Certain things in life I see as mere details. I want them to fade into the background, to be simple and almost invisible, so I can focus on other things.

Food has been a longtime member on my list of what I consider details, perhaps that’s why I want to see what comes of Soylent, the food substitute shake. One could also say I love PF (Prato Feito) for the same reasons because it’s hard to beat good ol’ meat, rice, and beans.

Rice and beans have traditionally been a staple on the Brazilian table. The term “arroz com feijão” even takes on its own connotation, that of activities that don’t change much, that are always the same old thing that you already know.

Something else I don’t want to change much is my appreciation for living in walkable cities. But having lived in Brazil I know that walking is rarely the way people get from home to work or school to home. This is, of course, where public transport enters the picture.

While I absolutely love driving (driving 8 hours is a piece of cake for me), I love walkable cities just as much. Sometimes, you can’t be in control and that’s why bus rides in Brazil rarely pleased me. The main pain point for me is the overcrowding, with the waiting game coming in close second. When dealing with public transport in Brazil and on a daily basis, there’s little to no fading into the background.

However, some people apparently like it, as I came to find out when reading British university student Lily Green’s take on the subject on her BBC blog “Para Inglês Ver”. Her most recent post is called “Ir e vir…de ônibus ou de carro?” (Coming and going…by bus or car?) and you can read it here (in Portuguese).

I’ll translate part of it below,

“Even in Recife, with its terrible traffic, I like to be, standing or seated, among some twenty or thirty unknown faces, each one with their own life, their own story.

For me, the bus is a snapshot of the daily life of a city. I never experienced a form of public transport that was so interactive.

One highlight are the sounds. They include the intervention of passengers: “Vai descer!” or “Abre no meio!”, the “speeches” of the bubble gum vendors (I had never stopped to think about the multiple benefits of mint) and the poetry of the men reciting cordel (simple but creative rhymes and literature particular to the northeast). The preaching of the evangelicals are almost a show in themselves.”

Are you going to use public transport or take taxi in Brazil? Download our Travel Portuguese handout to learn 31 travel Portuguese phrases and questions that will be useful in any trip to Brazil. The handout has the phrases with their English translations and  a link to a video lesson in which I pronounce all the sentences so that you can make yourself understood in Brazil. Get the lesson now. It is free.

Street Smart can certainly claim to be a one-stop shop for its students’ Portuguese needs. It has done a remarkable job in rigorously selecting a group of teachers who meet the highest standards in … END_OF_DOCUMENT_TOKEN_TO_BE_REPLACED

The lessons were fantastic, and just what I wanted. The biggest difference between my Street Smart Brazil lessons and others I’ve taken is that my teacher knows English and understands what America… END_OF_DOCUMENT_TOKEN_TO_BE_REPLACED

Loved the experience. All the material I have learned I have not lost. I continue using my Brazilian Portuguese on a daily basis. I continue to discover more on my own through literature, music, film,… END_OF_DOCUMENT_TOKEN_TO_BE_REPLACED