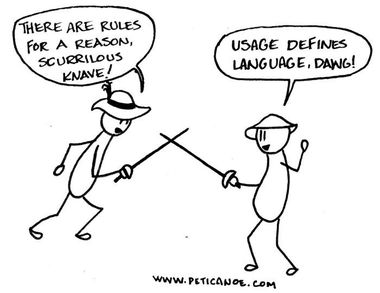 Something that comes up a lot in discussions about langauge is the argument between using the language as people actually speak it (with short cuts, slang, the “eating” of letters, etc) or using it more like the way one is taught to write it (properly, following all the rules, no matter if no one else actually follows them too). In linguisitics, it’s known as descriptivism and prescriptivism, respectively.

“Descriptivism is the belief that description (based on observation) is more significant or important to teach, study, and practice. Prescriptivism, however, aims to establish a standard language, to teach what a particular society perceives is correct language, or to advise on effective communication.”

When it comes to this particular subject, I prefer to think about what it means to be fluent. I look at fluency not only as understanding and being able to interact with the population and culture where a specific language is used but also as having the ability to be fluid and adaptable. That is, to be able to have a talk with a sugarcane worker with no schooling and then go to the nearest university and converse with a professor, to be able to write an essay in the language in question while later chatting with friends online using slang and online abbreviations.

Of course, you won’t always find yourselves in such extreme linguistic situations but having the ability and knowledge to be fluid is what matters, in my opinion. That being said, my Portuguese vocabulary is fairly large while my daily use of the language would show that it’s rather limited. This fact bothers me. I’m not entirely sure what it says about me if, in a decade of speaking Portuguese, I’ve never had to discuss intricacies or say something considered “deep” but I can say that I wish I had a lot more practice with this. The truth is, it’s easy to fall into your comfort zone in a second language.

I’ve always reserved English for talking about just about anything, including the complexities of life, and maybe my seemingly limited vocabulary in Portuguese doesn’t reflect back on me or on Portuguese, but on what is natural for anyone who speaks more than one language. After all, over 20 years of my life was spent being educated in English. Considering all I’ve said, I sometimes question what it means to really be fluent. Having met people who’ve told me, “I used to be fluent in (insert language here) but now I only remember a few words”, all I know is I don’t ever want to reach that point.

Language Learning: How to Create Immersion from Home

Learning Portuguese with a Focus on Cultural Proficiency

I really like studying with Street Smart Brazil. The quality of instruction and materials that Street Smart Brazil provides exceeds any I have received elsewhere. I actually look forward to it every w… END_OF_DOCUMENT_TOKEN_TO_BE_REPLACED

I have been using Street Smart Brazil for over two years now. I am pleased with my development in Brazilian Portuguese. I have had opportunities to use Portuguese on my job and intend to create more … END_OF_DOCUMENT_TOKEN_TO_BE_REPLACED

I’ve been extremely happy with my classes through your program. My instructor is great and very good at formulating lessons which are challenging but also accessible for a beginner like me. She’s also… END_OF_DOCUMENT_TOKEN_TO_BE_REPLACED