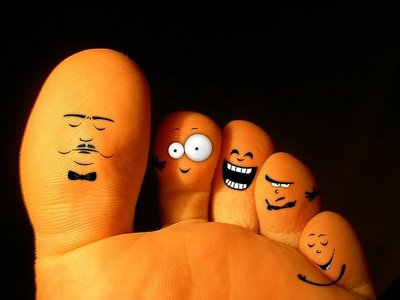 The other day, someone I know was talking about their head, more specifically, their scalp, and I realized off the top of my head (…get it?) I didn't know the word for it in Portuguese. For lack of actually knowing it, I made up the word escalpo (which is actually correct, scientifically-speaking). The popular name, however, is couro cabeludo, or rather "hairy leather". Why it would be called that is a bit of a head scratcher, but I suppose it's more or less understandable.

Several minutes passed while I considered the introduction of the new phrase and that's when I remembered a few other seemingly different choices for bodily terms. The one that most quickly came to mind is "potato", or rather batata, which is the popular name for the calf muscle (my first guess would have been bezerro, or baby cow, but I guess not). The full name is batata da perna, or "leg potato", and its technical name is more than a mouthful. Panturrilha.

With my head now full of words like hairy leather and leg potato, like scrounging around for loose change, my mind reached for any other spare words lying around in my brain. While not as glaringly different, talking about the roof of the mouth as the "sky of the mouth" (céu da boca) is an interesting way to put it…

…as is referring to my toes as fingers (dedos). Ok, so technically, fingers of the foot (dedos do pé). See this link, and just below it, for all the different words for each finger and toe.

Actually, it might not be so well-known but many PIE languages (that is, Proto-Indo-European) use one term for the toe and finger, making English one of the outliers, not Portuguese. In any event, dedo just means digit and digit can mean finger or toe.

I'll leave you with a link to an article, in Portuguese, talking about 10 parts of the body that have strange names.

Street Smart Brazil impressed me with the structure and outgoing personalities! I was able to learn the language 2 months before I went to Brazil and I can say it was because of Street Smart Brazil. … END_OF_DOCUMENT_TOKEN_TO_BE_REPLACED

Streetsmart Brazil has great teachers. They are interested in creating a learning experience that I look forward to every week. I’ve progressed and become comfortable with my use and understanding of… END_OF_DOCUMENT_TOKEN_TO_BE_REPLACED

I really enjoy studying with Street Smart Brazil. I have learned a tremendous amount and always look forward to the class. In June I traveled to São Paulo, Brazil, to visit my girlfriend and meet her… END_OF_DOCUMENT_TOKEN_TO_BE_REPLACED

I really enjoyed the lessons with my instructor; there was not a single moment of boredom throughout any of the lessons. Initially, I had asked my teacher to help me work on the subjunctive, thinking … END_OF_DOCUMENT_TOKEN_TO_BE_REPLACED