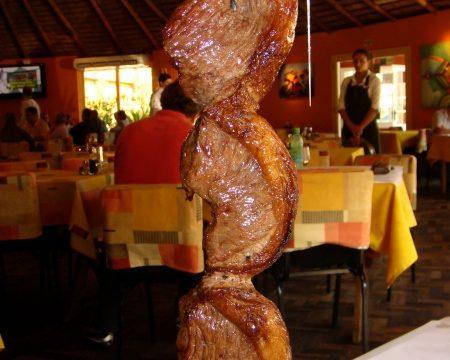 The rear of the steer (or heifer) is the most sought-after piece of meat in Brazil. In fact, I’d bet that Brazilian scientists have dreamed of one day creating an animal that only produces such meat.

One might not know it by its name in English, a cut of beef whose technical denomination alternates between the ‘rump cover’ and ‘rump cap’, but in Portuguese it’s called picanha. The reason Americans might not know about it is due to the fact that American butchers generally divide up that region into other cuts like the rump, the round and the loin. That being said, there isn’t much of a point in discussing what picanha is and isn’t because there’s a very slim chance of finding a single American cut in your local supermarket to define it.

For such a great piece of meat, it has an unusual name. One story behind the name speaks of a once important Brazilian industrialist, named Francisco “Baby” Pignatari, who used to eat at a churrascaria called “Bambu” in São Paulo and his favorite type of meat was the top sirloin. On one occasion, the restaurant served him another kind of meat by mistake. Not initially noticing the difference, he ate it and loved it, at which point he asked the Argentine server about the region of the animal that the meat came from. The Argentine said it came from the part “donde se pica la aña“, which is apparently Argentine Spanish for “where one brands (the cow with the hot iron)”. From there, it is said the name picanha is derived (pica + aña).

A more simple, yet slightly-related explanation comes from veterinarian Pedro Eduardo de Felício, at a university in São Paulo who says that in the south of Brazil, the branding iron is called a picanha. Over time, the area of the animal that received the branding was called by the name of the instrument that did the branding.

No matter where the name comes from, the main thing is that you enjoy every single piece! There are a few tips for doing just that. When buying picanha, experts say it should weigh less than two and a half pounds. Anything more and it is most likely you will be paying for part of the “coxão duro” (silverside), which is a tougher meat located next to the picanha cut. The layer of fat on the bottom of the piece of picanha should be about one centimeter thick, otherwise the bovine was raised and fed in an unfit manner. Also, the color of the fat should be either white or light yellow, if it’s yellower than that, it means the animal was most likely old and the meat will be tougher than normal.

As for the actual cooking part, picanha is cooked over high heat, so if you are a fan of black pepper and don’t want it to burn up in the process, add it afterwards. All the picanha I’ve ever had was well-salted while it cooked but it’s important to use rock salt instead of sea salt because the latter will most likely ruin your picanha. The best tip of all, though, is to watch a Brazilian do it!

Below is a video (in Portuguese) that you can watch with a Brazilian and learn how to choose the right piece. By browsing Youtube you can watch a variety of videos on all aspects of picanha, although if you’d rather just eat it, many major cities have churrascarias where you are able to eat until the cows come home!

Street Smart Brazil is in my opinion the very best site for Portuguese learners on the web. Their teachers and lessons are definitely five-star quality. They not only teach you the language, but in a… END_OF_DOCUMENT_TOKEN_TO_BE_REPLACED

After studying abroad and living in Brazil I use Street Smart Brazil to keep up my Brazilian Portuguese. It is not just a tutoring service but a community. Constantly keeping it fresh with new ways o… END_OF_DOCUMENT_TOKEN_TO_BE_REPLACED

I really enjoy studying with Street Smart Brazil. I have learned a tremendous amount and always look forward to the class. In June I traveled to São Paulo, Brazil, to visit my girlfriend and meet her… END_OF_DOCUMENT_TOKEN_TO_BE_REPLACED