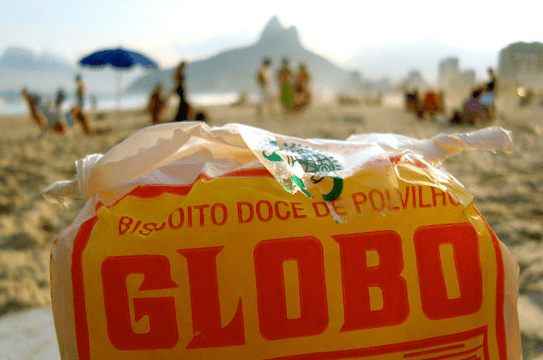 Ask any beach-going Brazilian that has been to Rio de Janeiro what images come to mind when they think of Rio and I’d bet Biscoito Globo is one of them. The famous doughnut-shaped powder biscuits are as common a sight as the sunbathers in Ipanema applauding the beautiful sunsets, silhouetted by Two Brothers hill. Speaking of brothers, three from São Paulo deserve some applause, too, as they are responsible for another pleasing sight, one that can be sweet, like catching some rays, or salty, like the sea itself.

The brothers’ success lies in the simplicity of their product. Let’s take a closer look:

The rest is history (or, at least the next part is)…

According to the Biscoito Globo site, it all started in 1953 when, after their parents separated, the three Ponce brothers went to live with their cousin who had a bakery in Ipiranga, in São Paulo. It was there that they learned to make powder biscuits with their cousin, which were sold on the streets of downtown São Paulo.

In 1954, taking advantage of a large religious conference in Rio de Janeiro, the brothers decided to sell their biscuits in the carioca capital. With their recipe for success, the Ponce brothers foresaw that, given the biscuits characteristics, Rio de Janeiro would be the ideal market for what they were selling.

The powder biscuit was given the name Globo in honor of the bakery contracted to make them in Botafogo. The year was 1955 and the biscuits were sold in the Globo bakery and in seven others, owned by the same people. Realizing the large demand for them, the Ponce brothers started to sell them to other bakery chains and in 1963, they formed a partnership with a Portuguese baker, an expert in breads.

There are other positive aspects that accompany a bag of Biscoito Globo, such as the fact that it’s perfect for making one’s stomach believe it’s fuller than it is. After all, who wants to swim on a full stomach? Other associated benefits mean the customer receives something that is low in calories, low in fat, without neither coloring nor preservatives.

The biscuit vendors are called ‘ambulantes’ and they can buy a package for 60 cents then turn around and sell it for an average price of R$1 on the beach. A pretty good deal where everyone walks away happy. Since the famous snacks don’t contain the aforementioned preservatives, they aren’t sold to the supermarkets, meaning the customers must seek out the individual vendors if they want to get their hands on the biscuits. On the beaches of Rio, that’s not a hard thing to do because the vendors are omnipresent, the packaging is unique (save for a few imitators), and the holler is the same…”Olha o Globo!”

Cultural fluency is part of our language-teaching approach. At Street Smart Brazil you become fluent in Portuguese and learn to navigate the Brazilian culture with ease. Don’t be an outsider. Book your Trial Lesson to see how we can make your life easier in Brazil.

After studying abroad and living in Brazil I use Street Smart Brazil to keep up my Brazilian Portuguese. It is not just a tutoring service but a community. Constantly keeping it fresh with new ways o… END_OF_DOCUMENT_TOKEN_TO_BE_REPLACED

When I started this journey of learning Brasilian Portuguese, I couldn’t even say “Obrigado” or “Como é seu nome?”. But now my communication skills have improved tremendously. Street Smart Brazil make… END_OF_DOCUMENT_TOKEN_TO_BE_REPLACED

A fantastic way to learn rapidly while having fun.  I took two sets of classes with Street Smart Brazil and was really impressed with the quality of teaching; from the informative handouts to the sch… END_OF_DOCUMENT_TOKEN_TO_BE_REPLACED

Street Smart Brazil and their instructors have proven themselves to be patient, smart, helpful, and true professionals in their craft. Learning a new language for me has been one of the most challen… END_OF_DOCUMENT_TOKEN_TO_BE_REPLACED