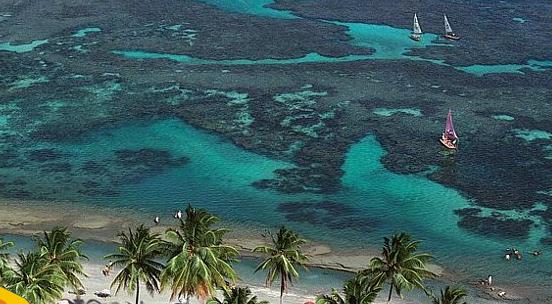 Midway up the coast of Pernambuco, less than 40 miles from Recife’s International Airport, lies one of the best beaches in Brazil, called Porto de Galinhas (lit. Chicken Port). The Brazilian magazine Viagem & Turismo holds an annual contest for its readers to elect the best Brazilian travel options and Porto de Galinhas has won in the beach category for the last 9 years in a row, making it the paragon of paradise.

How did such a pretty place receive such a strange name, you might ask? Originally, it went by the name of Porto Rico due to all the money made from the large amounts of brazil-wood that left the country from its shores, en route to Europe. The port, though, would later serve as the main point of arrival for illegal slaves in the northeast of Brazil during the 18th century. It is said that the slaves were frequently hidden below the chicken crates (technically, helmeted guinea-fowl known as Angolan chickens in Portuguese). Upon the arrival of new slaves, one would hear the phrase “tem galinha nova no porto!” (“there’s new chicken at the port!”), and thus the beach eventually had its name changed.

Today, the chickens are hand-painted, made of coconut shells and tree trunks, by local artisans to later be bought by the purchasing power and for the viewing pleasure of the many tourists to the region. This wasn’t always so, though, as it was only a few years ago that the local artists decided to find a marketable image that would serve as their golden egg, so to speak.

Chickens are definitely not the only thing being sold in Porto de Galinhas. Aside from the endless beauty of the barrier reefs and the natural pools, there are now resorts, nightclubs and refined restaurants that have moved in and exist side by side with the rustic charm that helped to make this old fishing village so popular in the 1990’s. With all the ‘development’ and changes, I can’t help but wonder where the locals go to ‘get away from it all’.

After studying abroad and living in Brazil I use Street Smart Brazil to keep up my Brazilian Portuguese. It is not just a tutoring service but a community. Constantly keeping it fresh with new ways o… END_OF_DOCUMENT_TOKEN_TO_BE_REPLACED

When I started this journey of learning Brasilian Portuguese, I couldn’t even say “Obrigado” or “Como é seu nome?”. But now my communication skills have improved tremendously. Street Smart Brazil make… END_OF_DOCUMENT_TOKEN_TO_BE_REPLACED

A fantastic way to learn rapidly while having fun.  I took two sets of classes with Street Smart Brazil and was really impressed with the quality of teaching; from the informative handouts to the sch… END_OF_DOCUMENT_TOKEN_TO_BE_REPLACED

Street Smart Brazil and their instructors have proven themselves to be patient, smart, helpful, and true professionals in their craft. Learning a new language for me has been one of the most challen… END_OF_DOCUMENT_TOKEN_TO_BE_REPLACED