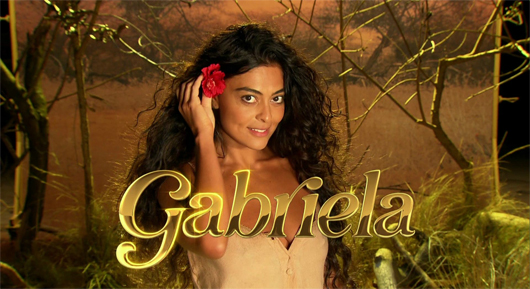 As a man, I feel I must confess. I’m watching a soap opera (my first) and, you guessed correctly, it’s Brazilian. It’s rather coincidental that I started watching it as I was walking past a street fair and saw a famous book for sale so I bought it, and the book was Gabriela, Cravo e Canela by Jorge Amado. As I started to read it, I felt there were too many characters being introduced for me to keep track and that’s when I remembered the telenovela made in Brazil a few years back called Gabriela (after a 1970s version with Sonia Braga in the lead).

A quick check with my girlfriend to see if she had seen it and luckily the answer was “no” since she’s also not the novela-watching type. After some hits and misses when looking for the episodes online (I kept finding the 70s version), I hit the jackpot when I found them all streaming, in a dead simple layout. To my surprise, there were 70 odd episodes (oops, I mean “chapters”) and each one generally ends on some sort of mini-cliffhanger with the next episode picking up exactly where the last left off. With each episode running about 30 minutes, I reckon the entire series is about 35 hours long.

A few things were made apparent to me after watching almost half of it so far. Couples, or would-be couples, have their own song that plays every time they’re shown together. There’s a lot of immediate and rather obvious foreshadowing so you know mostly what’s going to happen even though you haven’t seen the scenes being acted out yet.

The most surprising part so far is that Gabriela, played by Juliana Paes, is the most boring character ever. So much so that we’ve learned to skip most scenes concerning her. Don’t worry too much, though, because there are plenty of other characters (practically everyone else) who are interesting to watch on screen. If you’re not Brazilian, you still may recognize a few people. Among the familiar faces to me were actor Antônio Fagundes, actress Maitê Proença and, surely recognizable, singer Ivete Sangalo. The rest might as well have been newcomers to me.

All things considered, would I recommend it to you? Yes! It seems to be a good introduction into the world of Brazilian novelas, though as I understand it, most are modern while this one takes place in the south of Bahia in the 1920s, so be prepared for a lot of machismo (and some nudity). Without further delay, here’s the link!

PS – I would have included the trailer but I feel it gives away too much. In fact, after watching one minute of it, they had already shown the halfway point where I’m at. If you really want to see it, search “Gabriela Trailer Globo Internacional” on Youtube.

The quality of the instruction is outstanding. The instructors are flexible to schedule classes in times which are convenient. Being able to use SKYPE for face to face without traveling place to plac… END_OF_DOCUMENT_TOKEN_TO_BE_REPLACED

Learning a new language can be one of the most challenging things you can do. The individualized and wholly personal tact of teaching at Street Smart Brazil makes it a challenge that you will want to … END_OF_DOCUMENT_TOKEN_TO_BE_REPLACED

I’ve been extremely happy with my classes through your program. My instructor is great and very good at formulating lessons which are challenging but also accessible for a beginner like me. She’s also… END_OF_DOCUMENT_TOKEN_TO_BE_REPLACED