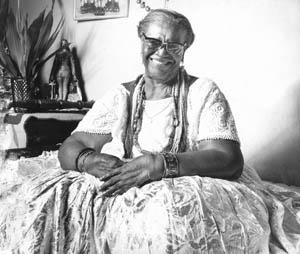 Much like the prohibition of slave gatherings in earlier times, the Bahian upper class in the early 1900’s didn’t like the idea that free blacks and those of mixed race could gather for any reason. In the face of a dominant European culture, the descendants of slaves were strengthening their own culture in their own way, and Afro-Brazilian religion was no exception.

Candomblé temples, or terreiros, were the preferential targets of police raids in the first decades of the 20th century. The police couldn’t know about or raid every terreiro in and around Salvador, so via legislation, the government was able to impose restrictions on Candomblé with the Games and Customs Act. The law made it so that the temples had to close down by 10PM every night and, no matter if they did or not, with one public complaint, the temples could be raided, the practitioners, beaten, and their sacred objects, destroyed.

It is said that Jorge Amado wouldn’t travel anywhere without her advice. Dorival Caymmi wouldn’t take a step without consulting her first. Antônio Carlos Magalhães (three-time governor of Bahia) took all of her suggestions to heart. And Vinicius de Moraes would run to see her when he was in Bahia. So who was she? She was the most famous mãe de santo, or priestess, in Candomblé.

When she was eight, she was initiated into the orixá cult and it was decided that she would assume the highest position of priestess of her family's temple one day. The temple was called Gantois and under her care it was to become the most respected in the entire country. She had barely just become a priestess at age 28 when the Games and Customs Act was established, yet over the years she was instrumental in having the law relaxed and eventually removed all together. She even succeeded in converting the top authority behind the enforcement of the law into a devoted follower.

Before her, Candomblé was rather closed off and conservative. Mãe Menininha changed all that through her devotion and by making her religion well-known while not letting it become a tourist attraction. Below, you can hear one of her followers, Maria Bethânia (along with her brother Caetano Veloso and their mother) singing Dorival Caymmi’s tribute to the priestess.

And here’s a short documentary (Part 1, Part 2, in Portuguese) about her.

The quality of the instruction is outstanding. The instructors are flexible to schedule classes in times which are convenient. Being able to use SKYPE for face to face without traveling place to plac… END_OF_DOCUMENT_TOKEN_TO_BE_REPLACED

Learning a new language can be one of the most challenging things you can do. The individualized and wholly personal tact of teaching at Street Smart Brazil makes it a challenge that you will want to … END_OF_DOCUMENT_TOKEN_TO_BE_REPLACED

I’ve been extremely happy with my classes through your program. My instructor is great and very good at formulating lessons which are challenging but also accessible for a beginner like me. She’s also… END_OF_DOCUMENT_TOKEN_TO_BE_REPLACED