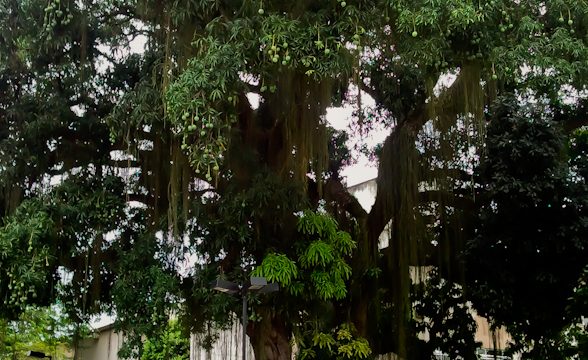 What does the word 'Manga' mean to you? If you'd asked me this question a few years ago I would have started talking about Japanese comics and anime.

However, two and a half years ago I moved to Rio de Janeiro and started learning Brazilian Portuguese, so now the word has very different associations: clothing and fruit!

Let’s start with the clothing meaning – ‘manga’ is the Portuguese word for the sleeve of a shirt. A sleeveless shirt (of the type commonly worn by women) is called a camisa sem manga – very popular in the heat of the Brazilian summer!

In many office environments, Brazilian men still wear a formal shirt (with a collar and buttons), but often it is worn without a jacket or tie and with the sleeves rolled up. In English we would describe this as being “in shirtsleeves” (it’s a look many politicians are fond of). In Brazil they use a similar phrase: “em mangas de camisa”.

I expect you can guess the fruity meaning of manga – of course it is what English speakers call mango. Brazil’s climate and fertile soil mean that many luscious fruits grow abundantly in much of the country. One of the nicest ways to enjoy these fruit is in the form of a vitamina (a drink made by blending fruit with milk/yoghurt).

But try going into one of Rio’s many juice bars and ask for a vitamina of manga com leite and you will be met with sharp intakes of breath of worried looks. This is because there is common belief among Brazilians that mango mixed with milk is poisonous!

When I first heard this story I was intrigued. Why mango and milk? Why not bananas and orange juice, or some other random combination? The answer lies in Brazil’s history, back in the times of slavery.

In those days, escravos (slaves) ate a lot of mangoes – a single tree can produce a vast crop and so these fruit were extremely cheap (not to mention sweet and delicious!). In contrast, milk was very expensive, so slave owners wanted to discourage their slaves from drinking any for themselves. So it was that some devious slave owner started the rumour that drinking milk with mango was poisonous. There are stories that some slave owners actually poisoned a slave after feeding them milk and mango to convince the others that it was true.

Uma Mangueira (a mango tree). When a single tree produces this much fruit, you can see why they’re so cheap in Brazil.

A quick internet search reveals that the rumour has survived to this day, with countless people asking if it's really a poisonous combination. Here is one response that proves that not everyone is so gullible:

While I suspect that deep down most Brazilians don’t really believe this combination is fatal, you’d still have to work hard to convince many of them to actually try it!

Tom Le Mesurier is originally from England and currently lives in Rio de Janeiro, Brazil. He is the author of Eat Rio – Food, Drink and Other Good Things and a guest blogger at Street Smart Brazil.

Street Smart Brazil has a wonderful program for teaching Brazilian Portuguese. All the teachers are professional, nice and a lot of fun to learn from. You learn a lot about everyday slang that is use… END_OF_DOCUMENT_TOKEN_TO_BE_REPLACED

I think Street Smart Brazil and all its services are great. It allows me to do schedule my classes from home when I have time in my busy work week. I am so grateful for this as otherwise I simply wou… END_OF_DOCUMENT_TOKEN_TO_BE_REPLACED

Last Friday was my first job interview conducted in Portuguese. I was scared to death walking in the place, thinking I was going to have to speak in English for a lot of the time. That is not what hap… END_OF_DOCUMENT_TOKEN_TO_BE_REPLACED