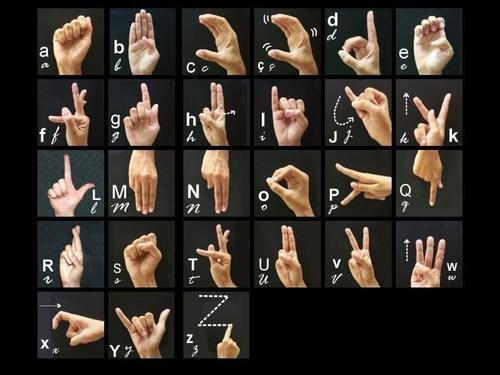 Growing up with a handicapped brother, I learned at a young age all the basics of ASL (American Sign Language). His handicap was such that he was free to do what he wanted at home which usually consisted of looking at magazines, dancing, saying mostly unintelligible things while talking to himself and, every so often, pinching people. My other brothers and I not only used basic ASL with him but also with each other when we were in public. The most usual case was when we were bored in the presence of others and wanted to leave, we’d make the sign for “let’s go” (which consists of both index fingers circling around each other).

My brother eventually went to live in a group home but I always thought it’d be kind of cool to one day learn more advanced sign language, only there was no longer an everyday reason to. Fast-forward about 15 years, and with fluency acheived in a whole other language (Brazilian Portuguese), I started to think about what it’d be like to learn sign language. In the very least, I could then learn the basics with my girlfriend and we could use it in public. The only problem is, much to my surprise (because I never truly considered it), each country has its own signs and even regionalisms within their own sign language. Luckily, my girlfriend is Brazilian and the type I’m looking to learn is the Brazilian kind.

In Brazil, it’s called LIBRAS, or Língua Brasileira dos Sinais and it actually constitutes as its own language, with its own grammar, syntax, morphology, etc. With an estimated 5 million deaf people in Brazil, it can be reasoned that most, if not all, use LIBRAS to communicate. Even with each country’s system being different, LIBRAS (along with ASL) has been considered to be a creole of 18th century French Sign Language. For this reason, there are quite a few similarities between them all.

To show some of the complexities of signing a language, I’ll explain 5 basic parameters. They consist of the following: hand configuration, articulation points (where you are signing, ie over your forehead or the neutral space in front of your body), orientation (directionality), movement (if the sign requires movement or is static), and expression of the face and body (seen the ASL of Lydia Callis yet?). In addition, another factor that plays into it all is the speed that the person signs in, whether it be fast (among those who have been deaf their whole life) or slow (fingerspelling, for kids, those who acquired the language later, or for spelling things that don’t have a standard sign).

There is lots of material out there, both online and offline on LIBRAS. On the web, there are some Brazilian websites you can check out which can teach you specific signs. I recommend Acesso Brasil’s online visual dictionary (keep in mind that verbs in LIBRAS are in their infinitive and, when written, in all capital letters, ie VOCÊ GOSTAR CARRO? = Você gosta do carro?). Just as cool as the other dictionary I mentioned is this collaborative dictionary. If you’re interested in more, just put “libras sinais” into Youtube and you’re sure to find a lot of content.

Sidenote: The sign for “Let’s go” I mentioned is actually considered “Signed English”, not ASL.

Street Smart Brazil is in my opinion the very best site for Portuguese learners on the web. Their teachers and lessons are definitely five-star quality. They not only teach you the language, but in a… END_OF_DOCUMENT_TOKEN_TO_BE_REPLACED

After studying abroad and living in Brazil I use Street Smart Brazil to keep up my Brazilian Portuguese. It is not just a tutoring service but a community. Constantly keeping it fresh with new ways o… END_OF_DOCUMENT_TOKEN_TO_BE_REPLACED

I really enjoy studying with Street Smart Brazil. I have learned a tremendous amount and always look forward to the class. In June I traveled to São Paulo, Brazil, to visit my girlfriend and meet her… END_OF_DOCUMENT_TOKEN_TO_BE_REPLACED