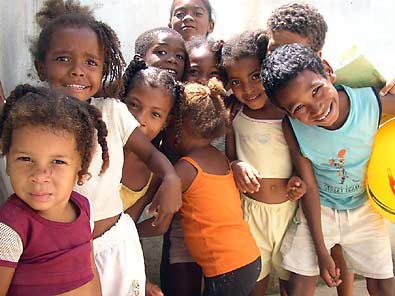 I was recently reminded of some concepts that are familiar to Brazilian children and reminiscent of things American kids also know. Being that they both speak different languages, the concepts below are expressed a bit differently.

In Portuguese, the ABCs are known as the “bê-à-bá” (said: bay-ah-bah). In fact, the term has a few related meanings such as “a child’s primer”, “a spelling exercise”, “first notions of reading” and the “initial understanding (of something)”.

An example I found online of how to use the term in a figurative sense is like this: “Para quem deseja aprender o bê-à-bá da cozinha, o Senac oferece o curso de Culinária…” (For those who want to learn the ABCs of the kitchen, Senac offers a culinary course…)

Most Americans grew up with this rhyme. I’m talking enough generations to go back to the beginning of the US as a nation. And although there are several variations, here’s the one I grew up saying…

Eeny, Meeny, Miny, Moe,
Catch a tiger by his toe,
If he hollers, make him pay,
Fifty dollars every day.

The other day, I used this around my girlfriend who then repeated it as she learned it. She said,

It was much to my surprise as I had never heard of this and never knew it was used in other countries for the same reasons (choosing someone or something from a group). Every little cultural or linguistic tidbit brings me closer to understanding Brazil and Brazilians better so I thank her for teaching me some of the bê-à-bá of the Brazilian experience, and now I’m passing it along to you!

I’ve really been enjoying the classes and I’m learning a lot. The classes have motivated me to learn more and more! This is my first time taking classes via Skype – and I’m enjoying the convenience an… END_OF_DOCUMENT_TOKEN_TO_BE_REPLACED

Street Smart Brazil has excellent and flexible training. It was able to meet our needs for ongoing Portuguese study. They also are constantly evolving their offerings which keep me involved and learn… END_OF_DOCUMENT_TOKEN_TO_BE_REPLACED

Streetsmart Brazil helped me to attain a Celpe Bras proficiency rating of advanced intermediate. Not only have I improved my reading and writing skills, I can speak more fluently on a wide range of t… END_OF_DOCUMENT_TOKEN_TO_BE_REPLACED