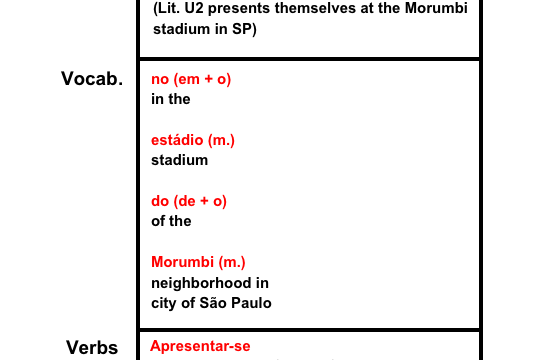 In my Street Smart Brazil blog posts over the years, I’ve mentioned several times the personal importance of having translated word for word from newspaper articles when I was in the midst of learning Brazilian Portuguese. One thing I’ve never done here is to show what that actually means, and luckily, I once considered doing a series of posts on my old blog to demonstrate my method…therefore I have a single example to show above.

The reaction when polling my audience was a very positive one, as they all loved the idea. For some reason, I didn’t follow through with more at the time, but perhaps I should have! As can be seen in the picture, I took a random headline from a Brazilian newspaper and then broke it down in all the ways I could think of. While I didn’t create displays like the one above in the early days, the basic process is the same, only I’d study entire articles rather than just the headline.

Let’s take a second example with a random, more current story, from O Globo on September 2nd, and break it down, in words only and by leaving out anything too simple (ie, jeans).

Translation: “Being a butler is in demand, even wearing jeans and a t-shirt.”

Literally: “To be butler is booming (“is in high”), even in jeans and t-shirt.”

As can be seen, with Brazilian Portuguese verb and word reference materials, plus a little gumption in some cases, anyone can do the same! If you feel comfortable with this translation exercise, I suggest giving it a go…even if you don’t feel prepared, I’d still suggest trying it and seeing how far you get.

Street Smart can certainly claim to be a one-stop shop for its students’ Portuguese needs. It has done a remarkable job in rigorously selecting a group of teachers who meet the highest standards in … END_OF_DOCUMENT_TOKEN_TO_BE_REPLACED