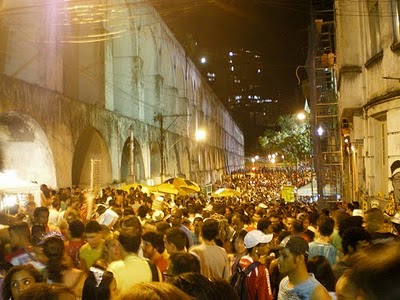 Despite being in Rio for many, many months, I had only spent one night in Lapa. For those who are unfamiliar with the neighborhood, it’s the place to be on Friday nights in Rio. It’s a place that is popular among a wide spectrum of people. You name it, you’ll see it…rockers, hipsters, hippies, homeless, addicts, and anyone else with an alternative lifestyle.

Two Friday nights ago, I accepted a last-minute invitation from a Brazilian friend. We met in Catete, a neighborhood which borders several other better-known neighborhoods like Santa Teresa and Flamengo. With a quick 10 minute walk, we arrived at the famous Carioca Aqueduct, where we met up with 4 other foreigners (which, by the way, is the other large group of people that visit Lapa). We were apparently there to catch a band playing big band versions of Brazilian rock hits. After an hour of chatting, drinking latões (large-sized beer cans) and listening to the music, we started walking a few meters away and caught an ‘impromptu’ samba band hanging out on the corner, with about 10 local onlookers dancing like pros. Another hour went by and a few more latões were downed, so we wandered over several meters past the samba show and found a troupe of drummers (like you’d see with Olodum in Salvador da Bahia) making the crowd sway along with them. I watched with a smile on my face and, well, my thumbs in my front pockets, half because it was comfortable, half because there’s always talk of pickpockets on the busiest of nights.

After we had our fill of live music, we walked through the crowds and did some people-watching, something that rarely gets old in such a place. We stumbled into a bar and lo and behold there was a guy inside playing samba music to a rather motley crew (also not surprising). My new friends and I kept the drinks coming and got a chance to showcase our fake samba moves, all to the slight amusement of the only Brazilian in our group. As an aside, if you have two left feet, I highly recommend learning the fine art of fake samba, salsa and forró as it comes in handy in such situations.

At about 3:30AM, as the night was winding down and the drinks were having their full effect, we nestled in on the famous and colorfully-tiled Selarón stairs. After an hour of chatting, it was time to call it a night so I said goodbye to my new pals and took my friend to find her bus. Intoxicated and having spent most of my money, I spent the next two hours walking the nearby streets looking for a bus to take me home. At the point of sheer frustration, and with the day dawning, a lightbulb went off in my jumbled head. There was a metro station nearby so I started walking, got there in 5 minutes and was home in 20.

Did I have a great time? You betcha! Did it come at a cost? It sure did. I lost almost the entire weekend recovering in bed. It had been a long time since I had drank that much, but I realized it would be a downright shame to not have walked away without a strong lesson learned. Despite grabbing some drinks with your friends being a very popular social activity here, I quit drinking, cold-turkey and found it’s one of the best decisions I’ve made this year. If I could, I’d love to blame it all on Lapa, a place that kidnaps the night and you along with it, where it’s never too late, it’s only too early.

Brazil: The Land of Yeses – Say yes more than no to life in Brazil

The coast of João Pessoa – Where the sun rises first

Street Smart Brazil and their instructors have proven themselves to be patient, smart, helpful, and true professionals in their craft. Learning a new language for me has been one of the most challen… END_OF_DOCUMENT_TOKEN_TO_BE_REPLACED

Street Smart Brazil impressed me with the structure and outgoing personalities! I was able to learn the language 2 months before I went to Brazil and I can say it was because of Street Smart Brazil. … END_OF_DOCUMENT_TOKEN_TO_BE_REPLACED