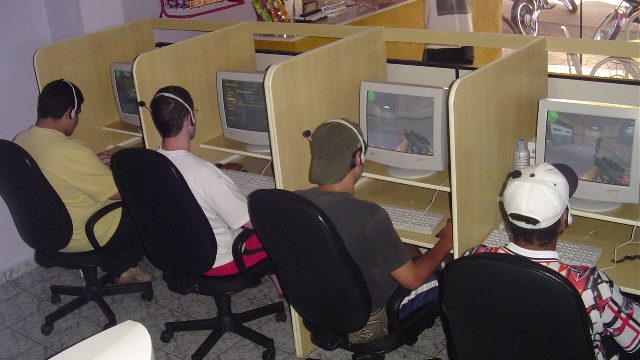 Cyber cafes (aka LAN Houses) in Brazil are omnipresent and currently make up 48% of all internet access points by Brazilians. Just to give a rough idea of their popularity, there are an estimated 108,000 cyber cafes in Brazil while the number of bookstores in the country is below 3,000.

A new law (in Portuguese) recently approved by Brazil’s Federal Court, and awaiting approval by the Senate, will require the 32 million Brazilians that currently use LAN houses to register themselves before being allowed to get online. Under the guise of protecting the underage crowd from accessing explicit content, every client’s digital footprints will be tracked. In exchange, the “digital inclusion centers” (as LAN houses have been deemed by the government) will be able to open lines of credit for the purchasing of new equipment.

Although the types of fines to be imposed for those who ignore the law have yet to be determined, according a report by the newspaper Folha, 90% of all LAN houses in the country are unlicensed. In light of such a figure, the new oversight begins to look like a thinly-veiled attempt to track and control both cyber cafes and their customers.

As I mentioned in a blog post more than a year ago, almost all cyber cafe users I’ve ever seen while living in Brazil are males in their teens who go there to use MSN and play popular shoot ’em up video games. Why they or anyone else need to be tracked is beyond my comprehension, though the idea does cross my mind that the new law will make many more businesses indebted to credit card companies or the like as well as increase, rather than decrease, the general hourly cost to the client for accessing the Internet.

This past January saw a precedent being made by Anatel (Brazil’s National Telecommunications Agency) when they gave a resident of Teresina, in the state of Piauí, a fine of almost US$2,000. His crime? “Acting as a service provider” when he shared his wi-fi connection with a few neighbors for the price of a fraction of his monthly bill. To put it in other words, the “criminal” was acting like an unlicensed LAN house.

Like most laws in most countries across the world, it is my opinion that their purpose is to collect revenue for the State by determining not what is right or wrong, but what is legal and illegal based on how those in power define such terms. As for where these tactics leave Brazilians, I assume they will either open their wallets (to pay higher prices and to show their identification) or find ways to make informal LAN houses even more informal by going “underground”.

I can highly recommend learning Portuguese with Street Smart Brazil. I have very good tutoring. My teacher is competent and nice. Her classes are great and she challenges me every single time in a ver… END_OF_DOCUMENT_TOKEN_TO_BE_REPLACED

The web class is a unique setup. When I first heard about it I thought it would be too weird to try to do something so personal and interactive as a foreign language online. Now I am sort of devotee. … END_OF_DOCUMENT_TOKEN_TO_BE_REPLACED

Street Smart Brazil is very convenient and the professors are incredibly professional. I enjoy the classes because of the convenience and flexibility in my busy work schedule. I have been a student al… END_OF_DOCUMENT_TOKEN_TO_BE_REPLACED

The quality of the instruction is outstanding. The instructors are flexible to schedule classes in times which are convenient. Being able to use SKYPE for face to face without traveling place to plac… END_OF_DOCUMENT_TOKEN_TO_BE_REPLACED