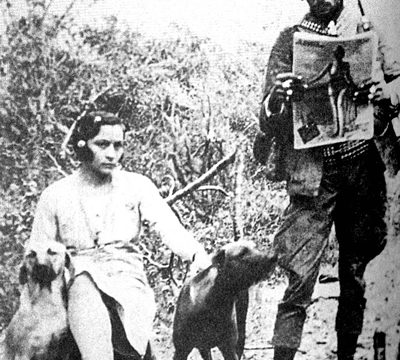 When I was eight  I saw this TV series based upon a true story called Lampião e Maria Bonita. It took place in the dry lands of Brazilian Sertão, a bit similar to –and not far from- the region of Crisópolis, where grandpa Octavio had settled alone in a house, in the middle of nowhere, after leaving the big city once and for all. I remember having cherry tomato wars with my siblings, picking cotton from the trees in his backyard and eating his polenta. I also remember looking at the moon from the porch and feeling overwhelmed by its power, its mystery, and by the fact that it surely knew everything about my future (but it wouldn’t tell me). In terms of landscapes, I am not sure where the memories of this TV series end and where those from my childhood at grandpa Octavio’s little ranch begin.

In this television story Lampião killed and robbed like crazy but was also an honorable man because he helped the poor. He hated the police and the land-owners; and had the most beautiful love, Maria Bonita. Together they conquered the world and made it a better place to be, for some. In the end both were finally caught and beheaded with no mercy, their heads rolling on the ground like two cantaloupes to the sound of Mulher Nova, Bonita e Carinhosa -an epic tune sung by Amelinha that is still one of my favorites ever.

As I came to know, Lampião was the highest representative of the Cangaço, a social phenomenon that took place in the Northeast of Brazil in the late 19th and early 20th centuries. Armed outlaws known as cangaceiros reacted against the domination of the land-owners and the government and  started to act as bandits roaming the arid lands of the Sertão. I must add that research made in more recent times has stated that Lampião was no less of a thief than any other, making deals with colonels and stealing from anyone, even the poor. His is a story filled with contradictions.

The cangaceiros held nomadic habits and wore leather clothes and hats to protect their bodies from the thorny vegetation of the region during their escapades. They were always ready to confront every sort of situation and knew the territory very well, which made them really hard to be caught by the police. They knew where to find water, food and medicinal herbs, had emergency escape routes and hiding places. They developed the most incredible tricks to avoid capture, like wearing rabbit fur shoes to leave no footprints or walking backwards through a path they had just walked, all as a way to confound the police. And the stories are such and so many that one can no longer separate myth from fact.

Photo: Lampião and his band were caught and killed in July 28th, 1938, in one of their hideouts in Angico (Sergipe). After being disposed and photographed in front of the City Hall of Piranhas (Alagoas), their heads were paraded thorugh the neighboring cities.

All that said, I was startled a few weeks ago when I ran into this video on You Tube. It’s a film of Lampião and his band made in 1936 by Lebanese amateur photographer Benjamin Abraão, who convinced Lampião  that documenting his life on video would only work to his advantage. Benjamin is said to have been somewhat charismatic and obtained full access to Lampião, his people and their unusual, hidden lifestyle. The result was 2 hours of footage that, confiscated by  the police shortly after it came out, remained forgotten for about 25 years. Very little of it remains intact…

Learn to sing an excerpt of Mulher Rendeira, which according to many has ben made by Lampião himself. It’s fun! And maybe in the next Aula Viva gathering we will be playing pandeiros, rattles, and dancing and singing to the sound of one of the most remarkable Brazilian folk songs.

See you soon, and hope you enjoyed the ride!

Street Smart Brazil has a wonderful program for teaching Brazilian Portuguese. All the teachers are professional, nice and a lot of fun to learn from. You learn a lot about everyday slang that is use… END_OF_DOCUMENT_TOKEN_TO_BE_REPLACED

I think Street Smart Brazil and all its services are great. It allows me to do schedule my classes from home when I have time in my busy work week. I am so grateful for this as otherwise I simply wou… END_OF_DOCUMENT_TOKEN_TO_BE_REPLACED

Last Friday was my first job interview conducted in Portuguese. I was scared to death walking in the place, thinking I was going to have to speak in English for a lot of the time. That is not what hap… END_OF_DOCUMENT_TOKEN_TO_BE_REPLACED