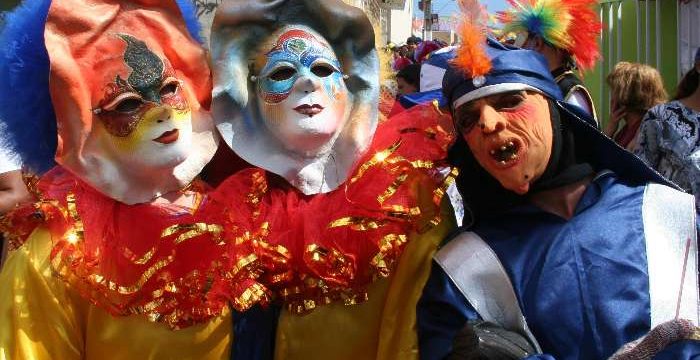 Too early for Carnival? Afraid so. Too early to dream (and possibly plan)? Of course not!

My last mention of the party of all parties revolved around the city of Recife but I´d bet that few have heard of the Italianesque Carnival of inland Pernambuco. A little more than 60 miles from Recife lies the city of Bezerros, often called the Land of Papangus. A Pap-what, you ask? A Papangu! Its a person that disguises themself with a Venetian-like mask and a long tunic, among other things, during Carnival-time across Pernambuco, especially in the city of Bezerros where such traditions are strongest.

The unique custom dates back to around 1880´s when the “papa-angu” was born from tomfoolery instigated by the relatives of sugar cane barons during Carnival celebrations. There, they would eat “angu”, (a coarse polenta) which is a typical food of the semi-arid regions of the Northeast. The verb papar, in kid-speak, means to eat, thus the name papa-angu. Tiny tikes, as it turns out, don´t always take a liking to the costumed crowd. Looking at the picture below, I can see why.

Generally, nothing can be discerned from seeing a papangu on the street, aside from their height and manner of movement. Who they are, whether they be male or female, old or young, is unknown. The revelers even go so far as to hide their costumes as they are being created in order to provide complete anonymity. One would think that such secrecy would presumably make it hard for groups to form, or in the very least, to know who is who, though hitting the streets with friends and family is quite popular..

If you´re interested in a visit next year, be mindful that the 2011 version attracted 200,000 people just on Carnival Sunday, the most popular day during the festivities and also when best costumes are chosen. Although it is likely you´d never be able to tell in the midst of all the costumed fun, residents of Recife are said to “religiously” attend during the weekend and it´s not even uncommon for some families to have a country house there, too.

Hopefully, Carnival revelry isn´t all you carve out for your trip inland. The beautiful vistas of the Serra Negra Ecological Park can be appreciated nearby, too.

I really like studying with Street Smart Brazil. The quality of instruction and materials that Street Smart Brazil provides exceeds any I have received elsewhere. I actually look forward to it every w… END_OF_DOCUMENT_TOKEN_TO_BE_REPLACED

Loved the experience. All the material I have learned I have not lost. I continue using my Brazilian Portuguese on a daily basis. I continue to discover more on my own through literature, music, film,… END_OF_DOCUMENT_TOKEN_TO_BE_REPLACED

As a language lover, I have learned multiple foreign languages through multiple sources and media. I must say that Street Smart Brazil is absolutely the best language program that I have encountered. … END_OF_DOCUMENT_TOKEN_TO_BE_REPLACED