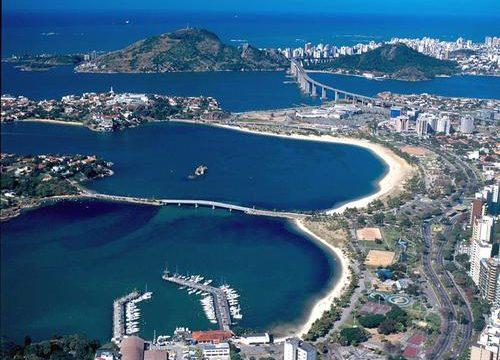 As a gringo living in Brazil, there is a list of questions that pretty much every Brazilian will ask you. The first one is, “What are you doing here?” the second “Do you like it here?” and the third “Where did you learn to speak Portuguese?” I answered the first two questions last week so today I am going to talk about how I learned Portuguese.

I spent my first two months in Brazil living in Vitória, Espírito Santo with a dude who doesn’t speak any English. This more than anything else is what contributed to my success in learning Portuguese. By living with Marcão it was either sink or swim. If I didn’t learn how to speak Portuguese it would have been a very awkward two months.

I definitely had the motivation to learn, and in addition to that I was in the right environment. I didn’t know of a single foreigner in the city, and very few people that I met spoke English. Even if I wanted to, I just didn’t really have the opportunity to speak English.  And on the rare occasion that I did meet someone who spoke English, after exchanging a few words we’d always go back to Portuguese so as to not exclude anyone else that was around.

Motivation and environment were indispensible parts of my learning process, but what really set me over the edge was my knowledge of Spanish. I had studied Spanish in high school for years, and had just spent several months traveling around South America and sharpening my tongue by the time I arrived in Brazil. While Spanish and Portuguese are two distinct languages, knowing one will give you an advantage when you learn the other.

In the beginning I spoke mostly portuñol and this initially caused some problems. Because of the similarity between Spanish and Portuguese, I initially had a hard time differentiating the two languages in my head. It was basic words that gave me the most trouble, but over time I learned to say obrigado instead of gracias, mas instead of pero, onde instead of dónde, olha instead of mira and falo instead of hablo.

I beat Spanish pronunciation out of my head and learned to pronounce restaurante with an h sound instead of a rolled r. I learned to pronounce dia like gee-uh instead of dee-uh.  Strangest of all I found myself pronouncing tio as chee-oh instead of tee-oh. The first few days when I started speaking Portuguese I felt like a practical joke was being played on me because it seemed impossible to my Spanish speaking brain that “Donde está el restaurante” should be pronounced “Ohn-dgee esta ooo hest-arr-onchee.” Eventually as I heard more Portuguese being spoken I accepted the fact that Brazilians actually spoke that way.

Once I got the hang of pronunciation I began to see similarities between the two languages that I exploited for quick vocabulary boosts. Words that end in ión become ão, so e acción becomes ação. Nación becomes nação, presión becomes presão, and conjugación becomes conjugação.

Cannibalizing my Spanish as well as speaking only in Portuguese for several hours a day meant that I was able to become conversationally fluent in two months.  I could start conversations with strangers, I could ask for directions and I could even make jokes in Portuguese. At the beginning I was afraid of asking where the restaurant is, but by the end of two months I was able to have lengthy conversations about topics that interested me.

The best part about learning Portuguese was how my worldview shifted as a result. When I first stepped foot in Brazil I looked upon everyone and saw foreigners who spoke a funny sounding language that I couldn’t understand. But as my Portuguese improved, a beautiful thing started to happen. With every word that I learned I stopped seeing fewer foreigners and started seeing friends. In two months of learning Portuguese a foreign country became a land full of friends.

Josh Plotkin is from California but also calls Belo Horizonte his home. He runs the site Brazilian Gringo to help others move to Brazil and teach English.

Streetsmart Brazil helped me to attain a Celpe Bras proficiency rating of advanced intermediate. Not only have I improved my reading and writing skills, I can speak more fluently on a wide range of t… END_OF_DOCUMENT_TOKEN_TO_BE_REPLACED

I always wanted to learn a second language, but as much as I tried, I couldn’t manage to do it on my own. Much to my surprise, after learning with Street Smart Brazil, I find myself speaking in sente… END_OF_DOCUMENT_TOKEN_TO_BE_REPLACED