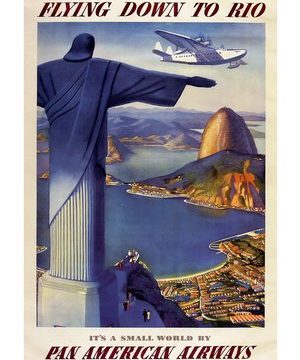 I’d like to tell a story of a 24-year old guy living in Rio for what turned out to be 6 months, though his very loose plan was to find work, and a way to stay indefinitely. He wanted to see the world, to live abroad and experience life outside his own inward-looking culture. The choice was not obvious, for all he knew of Brazil was they had some sort of big party called Carnival. Surely, not enough to decide to pack all one’s bags and move halfway across the world. Nonetheless, he took a chance and didn’t look back.

One night, during a random conversation with his father back home, he was told a story he had never heard before. Apparently, as he learned, his father also came to live in Rio when he was 24 and also stayed for 6 months, while working on a project for the company that employed him. Quite the coincidence…but it doesn’t end there.

His father met a local girl. They were going “steady” and all the while hatching plans to have her come to the US so they could be together full-time. The only “issue” is another woman unknowingly came between them, albeit months later.

You see, when his father returned to the States, he found himself on a random flight with a young and charming unknown woman. She was a stewardess and, as luck would have it, stationed in the same midwestern city that the father was living in at the time. They struck up a conversation and it was more than evident that they should meet again.

Due to the fact that the months were passing by since his trip to Rio, and with him being steeped in work, it was coincidentally becoming less evident that things would work out well between him and the young carioca girl. After all, there was now the promise of a new woman in his life and, with her, the prospect of a future that looked much more likely.

The story comes to an end with the stewardess marrying the father…but it doesn’t end there. The father is mine, and the stewardess, my mother. Yet here I am, spending the majority of my life in love with Brazil. Go figure.

Street Smart Brazil has been incredible. As someone who is focused on international business as a profession and a passion, learning languages has always been critical in helping me bridge cultures an… END_OF_DOCUMENT_TOKEN_TO_BE_REPLACED

We found that knowing a little Portuguese was very helpful. We had an absolutely incredible trip! Words in an email can’t describe how amazing our time in Brazil was.  And it was really nice knowing … END_OF_DOCUMENT_TOKEN_TO_BE_REPLACED

After studying abroad and living in Brazil I use Street Smart Brazil to keep up my Brazilian Portuguese. It is not just a tutoring service but a community. Constantly keeping it fresh with new ways o… END_OF_DOCUMENT_TOKEN_TO_BE_REPLACED