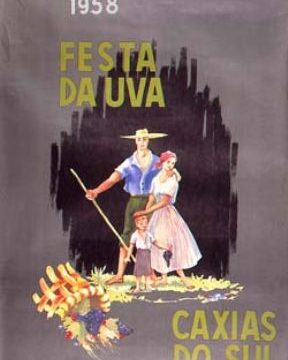 The Festa da Uva (or, Grape Festival) is a Brazilian celebration of Italian heritage which takes place every two years in the town of Caxias do Sul, in the state of Rio Grande do Sul. For close to 80 years, the residents have put on the celebration which usually falls around mid-February, lasting two weeks. As part of the festivities, local producers of food and wine present their best products to the public in an effort to both spread knowledge of their Italian roots and, of course, make a few sales.

The festival started not as a festival, but as an agroindustrial fair back in 1881, which brought together local farmers and producers so they could share ideas and showcase new methods to improve the harvesting of their crops. The fair was created as a means to centralize, even if just for a few days, those that normally worked scattered about in different locations within the region. It wasn’t until June 1st, 1910, that the first train began to run through Caxias do Sul, connecting the city (it was elevated to city status on the very same day) to nearby Montenegro and the state capital, Porto Alegre. The prosperous little city only became more prosperous with the new train since from Porto Alegre, a ship could take salesmen, along with wines, cheeses and other products, to São Paulo.

The new train didn’t just take people to far away places, it allowed others to come to the region such as traders and relatives who instead of just visiting, decided to move there and look for work. With the growth of the local industries and of the city, a Caxias do Sul resident named Joaquim Pedro Lisboa suggested in 1931 that a festival be created to celebrate the grape harvest. The press from the capital called it the “Little Grape Exposition” and though it only lasted one day, it was highly popular and even included airplanes doing fancy moves in the sky. The next year, they decided to do another Festa da Uva and in 1933, they added a new twist, the election of a Grape Festival Queen. In addition, the 3rd offering of the festival included the participation of three neighboring towns, Flores da Cunha, Bento Gonçalves and Garibaldi. The festival didn’t just reach other towns, its message of solidarity spread much further.

Brazil’s own president, Getúlio Vargas, said such bastions of cultural pride were nothing more than “social cysts” because to him they represented a fragmented society. Nonetheless, in Fascist Italy, there was an increasing interest in reconstructing the history of the emigrants. By doing so, such a history could be interpreted as a shining example of how the “Latin race” could contribute to the civilization of the New World, while also urging the Italians abroad to take pride in their ethnic origin. And take pride, they did.

Cleodes Ribeiro, a professor and researcher of Brazilian-Italian culture, describes the festival in the following way…

“If the celebration of the Grape Festival ritual served to proclaim the identity of the celebrants, display the result of their work over more than half a century and claim the status of being Brazilians, their defining characteristics were explained by the vocabulary employed in the symbolic ritual. The speeches, the exhibition and the distribution of grapes, the triumphal procession, the shopkeeper in their costumes, songs, banquets, congress and flags lining the streets, all reflected the efforts of the festival hosts in the process of self-representation.”

It is also important to note that these immigrant clusters in Brazil were not just refined to Italian descendants, nor was Caxias do Sul the only place Italians settled into upon moving to Brazil. These were people who created and sustained models of success that essentially came to replace the master-slave dynamic (of Portuguese descendants and their African slaves) that had encompassed Brazil for so long. To me, these often historical concentrations of once-separate nationalities that all landed in one country and eventually became one people, so to speak, are what makes Brazil so infinitely interesting. Even more so, each concentration retains either strong markers or, to a lesser extent, noticable vestiges of a more cohesive community-based identity. How many other nations can truly say the same of their people?

Streetsmart Brazil has great teachers. They are interested in creating a learning experience that I look forward to every week. I’ve progressed and become comfortable with my use and understanding of… END_OF_DOCUMENT_TOKEN_TO_BE_REPLACED

I always wanted to learn a second language, but as much as I tried, I couldn’t manage to do it on my own. Much to my surprise, after learning with Street Smart Brazil, I find myself speaking in sente… END_OF_DOCUMENT_TOKEN_TO_BE_REPLACED

I really enjoy studying with Street Smart Brazil. I have learned a tremendous amount and always look forward to the class. In June I traveled to São Paulo, Brazil, to visit my girlfriend and meet her… END_OF_DOCUMENT_TOKEN_TO_BE_REPLACED