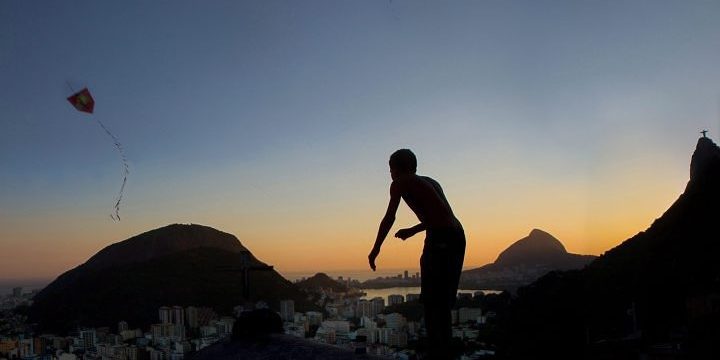 Surely no one thinks of kid’s toys when they think of Brazil, but one in particular is omnipresent here. It’s called the pipa (kite) and it’s known by many other names which I’ll list at the bottom. Even in a global culture of television and video games, Brazilian kids go crazy for kite-flying.

Kites were being used as far back as 550AD in China where they served for military purposes such as sending covert messages depending on the kite’s color and movements. In Brazil, they arrived along with the Portuguese settlers and they’ve been really popular ever since.

Growing up in the States, I only have a faint memory or two of playing with kites. The best I remember, we’d buy a kite kit that included the kite, sticks, and string (on a roll). After a running start, the kite was airborne and the wind did the rest. There was pretty much nothing else to it. The fun was in making something fly and letting the wind unroll the string.

In Brazil, it’s a whole other thing entirely. Of course, there are kites that can be bought pre-assembled but most kids seem to put them together piece by piece, almost as if there were a science to it all (who knows, maybe there is). There are even those in the interior who make their own glue out of a mix of farinha and water.

Flying kites can either be a solo activity or a social activity. When it’s social, the ‘name of the game’ is to take out the other person’s kite by wrapping your line around their line and taking their kite down. One rather easy way of doing this is by spreading a glue and (broken) glass mixture called cerol onto the kite line while the other way is to put something sharp on the kite tail itself.

There are dangers that come with the cerol mix, though, most notably when the kite line falls across the path of motorcyclists, bicyclists or other such people. Motorcycles sometimes come with an antena just for the purpose of cutting kite lines before they cut the driver.

Dangers aside, I don’t see a time when kites will go out of fashion. I think the joy found in flying them is telling of Brazil and the general culture here. Life can be complicated enough and so when there’s a moment to be free from your troubles, you grab ahold of it and leave the rest to the wind.

I think Street Smart Brazil and all its services are great. It allows me to do schedule my classes from home when I have time in my busy work week. I am so grateful for this as otherwise I simply wou… END_OF_DOCUMENT_TOKEN_TO_BE_REPLACED

I love my Portuguese lessons. My instructor is fantastic. She listens to my requests and allows me to practice what I want to practice. I also like the written exercises and the fact that I can practi… END_OF_DOCUMENT_TOKEN_TO_BE_REPLACED

Street Smart Brazil has excellent and flexible training. It was able to meet our needs for ongoing Portuguese study. They also are constantly evolving their offerings which keep me involved and learn… END_OF_DOCUMENT_TOKEN_TO_BE_REPLACED

A fantastic way to learn rapidly while having fun.  I took two sets of classes with Street Smart Brazil and was really impressed with the quality of teaching; from the informative handouts to the sch… END_OF_DOCUMENT_TOKEN_TO_BE_REPLACED