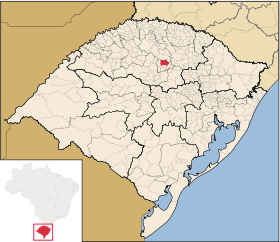 Brazilians are known for their warmth and joviality, though some say the further north one goes, the warmer the people (and the weather, of course). Going in the opposite direction, a little under 4 hours drive northwest of Porto Alegre, there’s a county called Não-Me-Toque (Don’t-Touch-Me) in Rio Grande do Sul. I’d say that being so far from the state’s capital, surely not many people will be touching down there but, before judging the county, let’s take a closer look.

The origin of the name is disputed and varied but two likely contenders for the true origin are that it comes from the name of a plant, found in the region, known as the Santo Antônio Thorn (aka. Não-me-toque). The other possible origin is the early 19th century Portuguese-owned farm called none other than Don’t Touch Me Farm.

As far as when to visit the surely charming city (I’m not kidding, I’m sure it’s a lovely place!), I’d say whenever the next tractor race (Arrancada de Tratores) happens. The county, along with Maripá (in Paraná), co-hosts the event, which from the video below, looks like a lot of fun!

PS – the video title says it’s Não-me-toque but the video report is about Maripá. In any event, it shows what the tractor race is all about.

I really enjoyed the lessons with my instructor; there was not a single moment of boredom throughout any of the lessons. Initially, I had asked my teacher to help me work on the subjunctive, thinking … END_OF_DOCUMENT_TOKEN_TO_BE_REPLACED

Last Friday was my first job interview conducted in Portuguese. I was scared to death walking in the place, thinking I was going to have to speak in English for a lot of the time. That is not what hap… END_OF_DOCUMENT_TOKEN_TO_BE_REPLACED

I can highly recommend learning Portuguese with Street Smart Brazil. I have very good tutoring. My teacher is competent and nice. Her classes are great and she challenges me every single time in a ver… END_OF_DOCUMENT_TOKEN_TO_BE_REPLACED