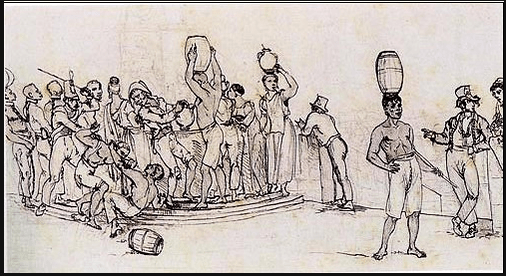 Rising at the base of Corcovado in the neighborhood of Cosme Velho and emptying into Guaranabara Bay from the Praia de Flamengo, the Rio Carioca has a history that parallels that of the city. As a freshwater river, the Rio Carioca quenched the thirst of the Indians, French, Flemish, Portuguese and Brazilians, all the while becoming a strategic point of interest as well as the setting of much discord.

In 1503, under the command of the Portuguese navigator Gonçalo Coelho, a stone house was built near the mouth of the Rio Carioca. Tamoio Indians living in the region began to call it “akari oka” (“carioca”), or “house of cascudos”. The name “cascudo” referenced the scaly freshwater fish the natives routinely caught, which they thought similar to the armor of the Portuguese explorers. While the house is surely long gone, the name “carioca” made its long-lasting mark on the city and its people.

Being a source of life for so many throughout the centuries, control of the Rio Carioca became of the utmost importance. Bloody disputes were fought over it and occupations were made from it.

Water carriers, known as aguadeiros, were slaves and Indians who roamed the streets selling water. Since not everyone had access to a servant to bring them their own supply of water from the Rio Carioca, the water selling trade was established. Indian water carriers roamed the streets with clay pots on their heads filled with water to sell. In their Tupi-Guarani tongue they yelled, “Hy! Hy! Hy!” (“Water! Water! Water!”). Many years later the Africans, who replaced the Indian captives as water carriers, repeated the same characteristic call to offer their merchandise.

Interesting to note, in Lisbon around the same time, water carriers were allowed to work without paying tribute to the State, under the condition that they assist in putting out fires on the spot, should they occur. I would guess the same was true of those in Rio de Janeiro.

From the early 1600′s, there was talk of building a system of canals to bring drinkable water to the city’s population, though it wasn’t until the mid-1700′s that the task was actually completed and water carriers were no longer needed. Once the Carioca Aqueduct was up and running, the Rio Carioca could bring fresh water to several fountains within reasonable distance of the city’s inhabitants. One of the main fountains was located in the nearby Largo da Carioca, then known as the Saint Anthony Square.

Fast-forward to 1896 and the aqueduct, like the water carriers before it, was no longer needed since more modern means were bringing water to the much larger population. The canals were turned into tracks for the Santa Tereza tramway, while nearby houses (such as those seen in the B&W photo above) were demolished by 1960 in order to highlight the monument.

As far as I know, no place on or near the arches pays tribute to those who actually built them, mainly African and Native American slaves. Without the work of these slaves, it is hard to imagine that Rio de Janeiro would have grown as it did, much less that it would have taken Brazil’s capital status from Salvador da Bahia.

When capoeira would land you in prison

The Slave Markets of Colonial Brazil

Street Smart Brazil and their instructors have proven themselves to be patient, smart, helpful, and true professionals in their craft. Learning a new language for me has been one of the most challen… END_OF_DOCUMENT_TOKEN_TO_BE_REPLACED

I’ve really been enjoying the classes and I’m learning a lot. The classes have motivated me to learn more and more! This is my first time taking classes via Skype – and I’m enjoying the convenience an… END_OF_DOCUMENT_TOKEN_TO_BE_REPLACED

Loved the experience. All the material I have learned I have not lost. I continue using my Brazilian Portuguese on a daily basis. I continue to discover more on my own through literature, music, film,… END_OF_DOCUMENT_TOKEN_TO_BE_REPLACED