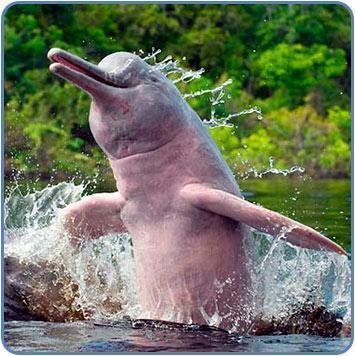 The Amazon river dolphin is one of four families of river dolphins around the world, principally occupying rivers throughout Asia and South America. They come in a variety of colors and, in the Amazon, it comes mainly in pink. A few things that differentiate them from other dolphins are their poor vision and their ability to turn their heads 180 degrees, which aids in maneuvering around in the muddied waters. Nonetheless, they’ve been taken by surprise far too many times in recent years.

The Amazon dolphin’s nature is to be friendly and unfortunately that has led to fishermen killing them in order to use their meat to catch large catfish which populate the rivers. There’s been an annual drop in their population of 7% per year, according to the Institute of Amazonian Research who has been studying the dolphins for close to 20 years. The other river dolphin families are also either being wiped out or have already been declared extinct in recent years.

One side effect from their gradual disappearance is the “lenda do boto”, or Amazon dolphin legend, might disappear along with it. Among native inhabitants of the region, it is said that during the nights of the Festa Junina, these dolphins become charming young men who seduce unsuspecting young women and end up impregnating them. The next morning, they turn back into dolphins and disappear into the water. When a young woman turns up pregnant, others will speculate that it was a dolphin’s fault. And when a child doesn’t know their father, the response is…you guessed it, the dolphin did it.

You can watch a short cartoon about the tale below.

The web class is a unique setup. When I first heard about it I thought it would be too weird to try to do something so personal and interactive as a foreign language online. Now I am sort of devotee. … END_OF_DOCUMENT_TOKEN_TO_BE_REPLACED

Last Friday was my first job interview conducted in Portuguese. I was scared to death walking in the place, thinking I was going to have to speak in English for a lot of the time. That is not what hap… END_OF_DOCUMENT_TOKEN_TO_BE_REPLACED

Learning a new language can be one of the most challenging things you can do. The individualized and wholly personal tact of teaching at Street Smart Brazil makes it a challenge that you will want to … END_OF_DOCUMENT_TOKEN_TO_BE_REPLACED

I think Street Smart Brazil and all its services are great. It allows me to do schedule my classes from home when I have time in my busy work week. I am so grateful for this as otherwise I simply wou… END_OF_DOCUMENT_TOKEN_TO_BE_REPLACED