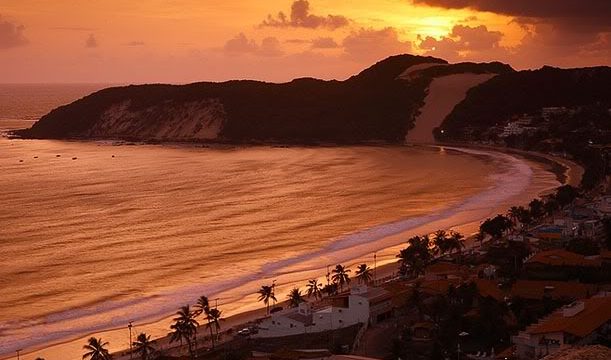 Things of a personal nature were turning sour. I had just up and moved to a new city, friends were either far away or hard to come by, I was finding it pretty difficult to relate to my neighbors in the quasi-favela where I was living (most of them were from the poorest parts of the interior, where I had also never been), and in the back of my mind a nagging feeling had grown legs and was crawling around, getting me to question my life and my choices, as well as my general geographic location. The singular person who I came to call my friend, after our one month sharing the same small apartment complex, was about to say goodbye, with no plans to return. I found myself in the straits.

This was Natal. It was 2012 and that was my life, but I needed to see the brighter side.

The friendship, built on many laughs and some similar life circumstances, held merit, even if it was to become an almost full-time prisoner of the black hole called Facebook (where we still eke out a few good conversations, here and there). Second to the laughs was the sensible sun, shining quite relentlessly while at the same time falling short of dispersing unhuman levels of humidity and hotness (but then again, maybe Rio’s hard-to-handle heat waves stole my powers of perception). On the occasion that darker weather was on the horizon, it seemed to stay around for no more than 30 minutes. In and out, as if to say hello. It was the kind of rain that’s just long enough to conjur up memories of far away places where people are stuck inside avoiding it, but verifiably short enough to let it slide off one’s back, so to speak. I often smirked at its smallness before continuing with my day.

The other positives were the money I was making online (a very conservative “more than usual”, but giving me some breathing room), the amount of it I could save living in Natal, and the furnished, one-bedroom apartment with Internet and utilities for only US$250/mo. Socially and existentially, I may not have been doing so well but, life is kind of funny like that, when some things go out of whack, others come into focus.

During those two months in the Northeast, I was living a coconut’s throw from the sea but due to the aforementioned issues I was dealing with, I strangely avoided the water for at least a month. With my mind weighed down, I questioned how well I’d float. Perhaps that makes me peculiar to some but, in these circumstances, I usually end up seeing the error of my ways soon enough. All it took was a single, spectacular sunrise, with a yellow-orange light reflecting off the breaking, baby-sized waves and, with sandals in hand, the warm water of the northeastern seaboard sliding over my feet below. Add to it a constant sea breeze and a few fisherman (for local flavor) and it was just shy of perfect.

Despite that near-perfection, I kept thinking about Rio, where I had spent the previous 10 months. The Northeast was my effort to search out new horizons but, as I later realized, the real search was actually internal. Nonetheless, I couldn’t help but think of the good times I had back in Rio. Natal, on the other hand, was almost a flip of the coin for me so the good things that exist there are things I had to personally, physically discover. While I thought of settling down in the Northeast, it was the Southeast that continued to haunt me, whispering sweet nothings and filling my mind with good times from those previous 10 months. That’s when I realized I’d have to live with the fact that there was more to Natal that I wouldn’t get to know than that which I did know because, socially and culturally, I didn’t insert myself enough there.

Now that all Brazilian cities (as possible living situations) are out of sight and out of mind for the next few years, I don’t find myself thinking so much about the initial 10 months in Rio, nor the two months (post-Natal) that I spent in São Paulo, nor the additional 6 months back in Rio. I find myself thinking about Natal and the nice apartment, the good pay, the gentle sea and sun, and all that one day I hope to discover.

A Bus Ride Through the Northeast

Natal: The City of Sun

After studying abroad and living in Brazil I use Street Smart Brazil to keep up my Brazilian Portuguese. It is not just a tutoring service but a community. Constantly keeping it fresh with new ways o… END_OF_DOCUMENT_TOKEN_TO_BE_REPLACED

When I started this journey of learning Brasilian Portuguese, I couldn’t even say “Obrigado” or “Como é seu nome?”. But now my communication skills have improved tremendously. Street Smart Brazil make… END_OF_DOCUMENT_TOKEN_TO_BE_REPLACED

A fantastic way to learn rapidly while having fun.  I took two sets of classes with Street Smart Brazil and was really impressed with the quality of teaching; from the informative handouts to the sch… END_OF_DOCUMENT_TOKEN_TO_BE_REPLACED

Street Smart Brazil and their instructors have proven themselves to be patient, smart, helpful, and true professionals in their craft. Learning a new language for me has been one of the most challen… END_OF_DOCUMENT_TOKEN_TO_BE_REPLACED