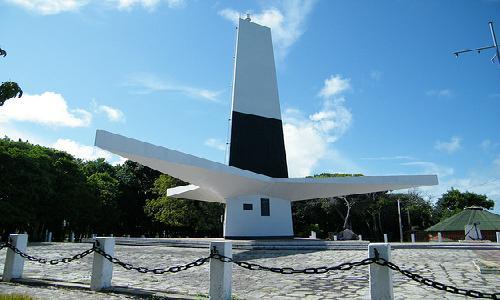 The easternmost point of the Americas can be found in Paraíba, near one of the state’s most famous attractions. Ten miles from the capital city of João Pessoa, one finds the neighborhood of Cabo Branco, a steep cliff, and the lighthouse in question. Made to resemble an agave plant called a sisal, used to make twine and rope for commercial purposes, the plant is of economic importance to Paraíba (and Bahia, the largest producer in the world).

Designed by a former professor of architecture and urbanism at the Federal University of Paraíba, Pedro Abraão Dieb, the lighthouse was inaugrated in the midst of the military dictatorship, over forty years ago. Just south is Ponta de Seixas, a small beach that is the true easternmost point of the Americas (often thought to be Cabo Branco), and the shortest route to Africa.

Up the coast from the lighthouse, though, is the Estação Cabo Branco, a cultural center with a modern look, reminiscent of the late Oscar Niemeyer’s work…and rightly so, he was the one who designed it! The center opened in 2008 and offers art and cultural shows as part of a social inclusion project.

The best part about all three of these places is you don’t have to spend a dime to see them (aside from the transportation to get there, of course).

I started traveling to Brazil 3 years ago for business and used Pimsleur to give me some basic proficiency. My employees in Brazil were always impressed with my willingness to learn their language and… END_OF_DOCUMENT_TOKEN_TO_BE_REPLACED

I’ve really been enjoying the classes and I’m learning a lot. The classes have motivated me to learn more and more! This is my first time taking classes via Skype – and I’m enjoying the convenience an… END_OF_DOCUMENT_TOKEN_TO_BE_REPLACED

Street Smart Brazil and their instructors have proven themselves to be patient, smart, helpful, and true professionals in their craft. Learning a new language for me has been one of the most challen… END_OF_DOCUMENT_TOKEN_TO_BE_REPLACED

I really enjoyed the lessons with my instructor; there was not a single moment of boredom throughout any of the lessons. Initially, I had asked my teacher to help me work on the subjunctive, thinking … END_OF_DOCUMENT_TOKEN_TO_BE_REPLACED