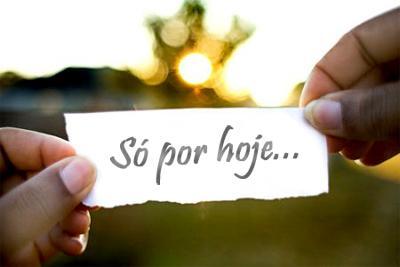 Online, I saw someone ask the question recently about the differences between three words in Brazilian Portuguese, all of them carry the meaning of “only” in English. The words are só, somente and apenas. Let’s take a look at the meanings and the examples I’ve created.

As an adverb, só means “only” and as an adjective, it means “alone”. Be careful because the meaning of a sentence can change depending on where só is placed (when used as “only”), as you’ll see directly below.

= She only brought one bag to the airport (she didn’t bring more).

= The man was alone when I saw him in the plaza.

In the picture above, the note reads: “Just for today” or “Only for today”.

= She wanted to converse but he only spoke Portuguese.

In this sense, I can also use só with the same meaning:

= She wanted to converse but he only spoke Portuguese.

This one is slightly different in that while it can mean “only”, it also means “just” and “merely” which aren’t all that different from “only”.

= Living is the strangest thing in the world. The majority of people merely exist.

Pedir vs. Perguntar: Get It Right with Street Smart Brazil – with Video

Especially if you are in Rio de Janeiro, I highly recommend this class! You don´t have to fight traffic to get to class, your teacher will show up on time, you can make your own schedule, and the ma… END_OF_DOCUMENT_TOKEN_TO_BE_REPLACED

Choosing to take classes at Street Smart Brazil was the best decision that I’ve made since deciding to learn Portuguese.  My classes are going very well. Every week my instructor gives me more challe… END_OF_DOCUMENT_TOKEN_TO_BE_REPLACED