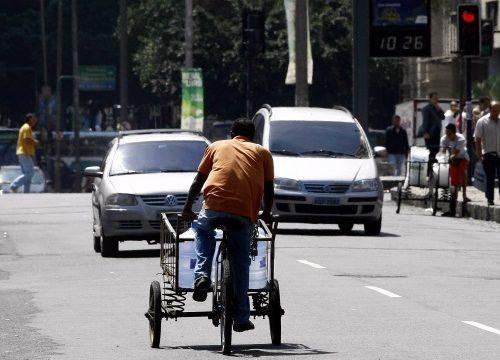 There are times when I realize I’ve forgotten the English word but recognize the Portuguese meaning and understand it in its context. It’s a bit of a strange sensation due to the fact that the sentence, in which a particular word is used, is not lost on me. I know what is being said and I can merely decide to just continue on reading without a loss in understanding.

But certain words leave me bothered enough to look up their meaning in English, just to refresh my memory. Unfortunately, it’s kind of like when I shake hands with someone new, and their name, having just been said, goes in one ear and out the other. I can have a conversation with them and I’ll remember other things about them, just not their name.

This brings me to a random article I was reading today about traffic in Brazil, where I saw the word contramão being used in the title. Upon seeing the word, my brain told me “streets, the wrong way” and I just continued. Kind of weird, right? I understood its general, fuzzy meaning in English, but couldn’t remember the specific word(s) in English. Being annoyed at my lack of recall in my own language, I looked it up and saw: “wrong way, contraflow”.

When I hear the word in question, for some reason, I think of the song Construção by Chico Buarque. It’s a great song where he cuts up the lyrics and mixes up line beginnings and endings to give different meanings. The line where he says the word is below:

So the person was going in the wrong direction (ie, no sentido oposto). Looking up the word, it always has “na” before it. For example, “estar na contramão” and “andar na contramão”. Google Translate says the phrase “na contramão” means “against the grain” and it’s in this meaning that one can see all the possible figurative uses. I'll leave you with an example:

“To have a critical view of professional sports is to be against the capitalist system; after all, the turnover of the worldwide sports industry is around US$1 trillion a year.”

Learn Portuguese: How to say 2 months ago vs. In 2 months – Video lesson

Brazilian Portuguese Words with Many Meanings: Riding the "Word Bus"

I’ve been extremely happy with my classes through your program. My instructor is great and very good at formulating lessons which are challenging but also accessible for a beginner like me. She’s also… END_OF_DOCUMENT_TOKEN_TO_BE_REPLACED

I always wanted to learn a second language, but as much as I tried, I couldn’t manage to do it on my own. Much to my surprise, after learning with Street Smart Brazil, I find myself speaking in sente… END_OF_DOCUMENT_TOKEN_TO_BE_REPLACED

Street Smart Brazil has excellent and flexible training. It was able to meet our needs for ongoing Portuguese study. They also are constantly evolving their offerings which keep me involved and learn… END_OF_DOCUMENT_TOKEN_TO_BE_REPLACED

I can highly recommend learning Portuguese with Street Smart Brazil. I have very good tutoring. My teacher is competent and nice. Her classes are great and she challenges me every single time in a ver… END_OF_DOCUMENT_TOKEN_TO_BE_REPLACED