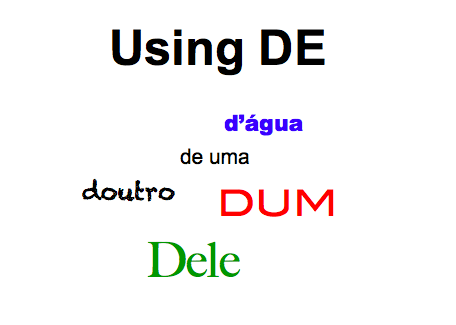 Sometimes during the language learning process, it’s something rather simple that messes with your head and makes you second-guess yourself. When learning Brazilian Portuguese, I remember how the simple word de would trip me up. Sometimes it was as simple as knowing when to use do or da.

Sure, there are types of people who throw caution to the wind when speaking and correct their errors through making them, but there’s another type of person, too. I belong to this other group, to one that looks at language in a premeditated manner. In fact, I do as much studying as I can, without being too obsessive, in order to skip the mistake-making stage, or at least to make it a private mistake rather than a public one.

Back to do or da, we use do before masculine nouns and da before feminine nouns. For example:

Other times it was about whether using a D-apostrophe was okay or not, such as with d’água (ex. um copo d’água = a glass of water).

I’ve also wondered if I can always use “dum” instead of “de um”. Here’s what a professional says:

Why do I say “Brazilians” and not “Portuguese speakers”? It’s because in Portugal and the other Lusophone countries these contractions aren’t so stigmatized as they are in Brazil; on the contrary, they’re the preferred forms of the speakers from those countries.” (link)

Furthermore, there’s the question of other kinds of contractions using de, such as after using the word depois. One question I had was if I could freely use depois dum or even depois dele, etc. I must admit beforehand, though, that one reason I have a soft spot for Brazilian Portuguese is because it can be so informal. For that reason, I feel more okay making a mistake in it. That being said, in the end, it’s always best to learn the rules before you break them.

Getting back to the quesiton of the previous paragraph, here’s what another professional had to say about that particular rule,

“A rule for employing “num” and “em um” isn’t known to me. It depends on personal taste. But there is a rule for employing “dum” and “de um”. We should employ “de um”, and also “de o” (not “do”), when the preposition “de” isn’t connected to the article that follows it, but rather the words that come further ahead:

The preposition “de” isn’t connected to the article, but rather to the bolded words to the right. The same happens with “de + pronoun/determiner:

If you’re interested in yet another instance of using de, check out this lesson on how to use de, da, or do in front of cities, countries, and states. For instance, do you say “Eu sou do São Paulo” or “Eu sou de São Paulo?”. Learn it here!

The quality of the instruction is outstanding. The instructors are flexible to schedule classes in times which are convenient. Being able to use SKYPE for face to face without traveling place to plac… END_OF_DOCUMENT_TOKEN_TO_BE_REPLACED

Learning a new language can be one of the most challenging things you can do. The individualized and wholly personal tact of teaching at Street Smart Brazil makes it a challenge that you will want to … END_OF_DOCUMENT_TOKEN_TO_BE_REPLACED

I’ve been extremely happy with my classes through your program. My instructor is great and very good at formulating lessons which are challenging but also accessible for a beginner like me. She’s also… END_OF_DOCUMENT_TOKEN_TO_BE_REPLACED