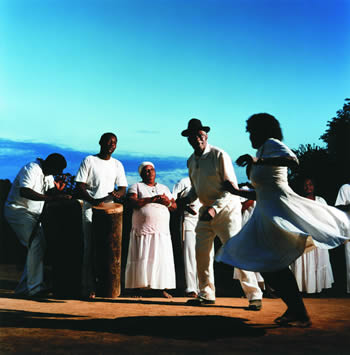 Before there was the oh-so-famous samba, there was the jongo, which is an African “belly-bumping” (umbigada) dance that can be traced back to a Bantu people of modern-day Angola. The belly-bump, in Kimbundu (a Bantu language), is known as the “semba“, which is where the word “samba” comes from.

While for both religious and entertainment purposes, there is also a more magical side to the Jongo. The bonfire serves not only to tighten the skins on their drums but also to illuminate the spirits of their ancestors. The drums are considered consecrated as if they were ancestors themselves of the community. The circular dance with a couple in the middle invokes fertility and the rich metaphors used in their “pontos” (short and easy to remember verses) are understood only by those who are jongueiros, or jongo participants. The uncertainty in the meaning also serves to keep the rythym (“tava durumindu, cangoma me chamô / tava durumindu, cangoma me chamô / disse levanta povo, cativeiro já cabô”).

Within communities where jongo is practiced, the elder jongueiros, known as “jongueiros cumba“, are respected for their knowledge and power. Metaphors used in the dance attest to their wise nature, such as one that says an elder once planted a banana tree on the night of a party and by the morning it was full of bananas, ready to eat.

Historical research shows that the Jongo was used as a way to maintain traditions of African cultures that spoke any one of the 400 Bantu languages. It is believed that these practices aided, both organizationally and communicatively, in the resistance against slavery. Even to this day, the jongo is practiced in many of the cities where it initially took root here in Brazil, such as in Rio de Janeiro, São Paulo and Minas Gerais.

From the 1970’s and onward, there has been a resurgence of the jongo, especially in Rio de Janeiro. By the mid-1990’s, the First Meeting of Jongueiros was created and since then it has continued to occur every year, attracting over 1,000 jongo practicioners per event in more recent years.

Check out the videos (in Portuguese) below for a better idea of what the jongo looks like!

I am really happy that I chose Street Smart Brazil to learn Brazilian Portuguese. My teacher is fantastic and I am always looking forward to my next lesson. I am very impressed of the amount of mater… END_OF_DOCUMENT_TOKEN_TO_BE_REPLACED

I love my Portuguese lessons. My instructor is fantastic. She listens to my requests and allows me to practice what I want to practice. I also like the written exercises and the fact that I can practi… END_OF_DOCUMENT_TOKEN_TO_BE_REPLACED

Street Smart Brazil is in my opinion the very best site for Portuguese learners on the web. Their teachers and lessons are definitely five-star quality. They not only teach you the language, but in a… END_OF_DOCUMENT_TOKEN_TO_BE_REPLACED