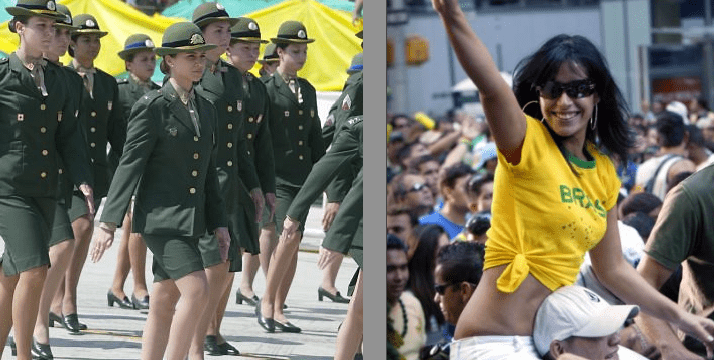 Prior to 1822, before Brazil was declared free from foreign rule, it was a Portuguese colony for 322 years. This September 7th, Brazilians will celebrate independence from Portugal with a national vacation…from work and school, that is. While independence is now shown by taking the day off to relax and perhaps seeing a parade, it wasn’t always so.

After the majority of the royal family returned to Lisbon in 1821, the Portuguese elite showed concern with Brazil’s status as a kingdom, bestowed upon it by Dom João VI several years prior. The result was that his son, the Regent Prince Pedro, was ordered to return to Portugal, too. At the time, Brazil was composed of two ruling, yet opposing parties, the Brazilian Party and the Portuguese Party. The former drew up a petition for Prince Pedro to remain in Brazil and create a sovereign kingdom. Eight-thousand signatures later, the prince was presented with the document and decided on the 9th of January, 1822 that he would not return to Portugal.

On September 7th, an official letter from the Portuguese court reached the prince with the message that he was, in fact, no longer a Brazilian prince since by law Brazil was no longer a kingdom. In the middle of a trip through São Paulo, along the Ipiranga river, Prince Pedro proclaimed independence with the famous cry of “Independence or death!” The next few years of the Brazilian War of Independence did bring about death for thousands of troops but by 1825, Portugal had officially recognized Brazil as autonomous. The interesting side note is that recognition was achieved by indebting Brazil to both Portugal and England.

After all that had to happen to bring Brazil to where it is, how do Brazilians celebrate today? Unlike the 4th of July in the US, where the order of the day (err, night) is fireworks, family, BBQ and beer, Brazilians back home are surprisingly of a less celebratory nature. With so many holidays in Brazil throughout the year, the 7th of September is just one in the crowd. At best, what you’ll likely see in the big cities are military parades, the largest of which occurs in Brasília. If you fancy having a better time, heading for the US is your best bet, especially if you consider the large crowds that amass in New York City for the holiday.

Started in 1986 in an area of the city known as Little Brazil, a Brazilian businessman with a little booth and a lot of affection for his culture kicked off the first Brazilian Day in NYC. Since then, it has grown exponentially. The NYPD estimated crowds of more than one million for the 2010 event and saw similar numbers this year (since the celebration sometimes falls on the weekend before). The mainstay of the special day has always been the concert, which has showcased some of Brazil’s most popular musicians such as Ivete Sangalo, Daniela Mercury, Skank and Claudia Leite. As you can see in the video below, there’s nothing “little” about Little Brazil. It makes one wonder why Brazil doesn’t try to organically create what it already exports.

The quality of the instruction is outstanding. The instructors are flexible to schedule classes in times which are convenient. Being able to use SKYPE for face to face without traveling place to plac… END_OF_DOCUMENT_TOKEN_TO_BE_REPLACED

Learning a new language can be one of the most challenging things you can do. The individualized and wholly personal tact of teaching at Street Smart Brazil makes it a challenge that you will want to … END_OF_DOCUMENT_TOKEN_TO_BE_REPLACED

I’ve been extremely happy with my classes through your program. My instructor is great and very good at formulating lessons which are challenging but also accessible for a beginner like me. She’s also… END_OF_DOCUMENT_TOKEN_TO_BE_REPLACED