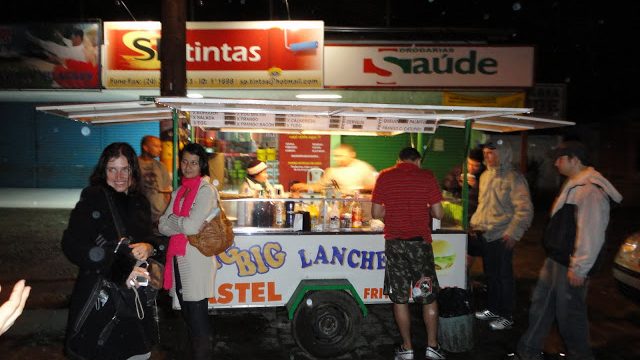 While living in Rio, in what can only be properly described as a frat house, its members introduced me to a late-night joint they’d frequent after hours. It’s a place that exists in the nebulous moments of the early morning, after partying but before going to sleep. They called it a “podrão”.

When I first heard the name, I was less than pleased with the possible destination of such a place and its associated connotation, given that podre means rotten.

To my surprise, it was just their word for late-night food truck. They gave the truck the same name as the food it served. In short, they meant any generic hot-dog or a hamburger bought on the street.

The ones I saw being bought, however, had just about everything put on them. By “everything”, I’m talking olives, quail eggs, potato sticks, raisins, grated Parmesan cheese, grated carrots, peas, corn, and chopped beets. Plus one can’t forget mayonnaise, ketchup, mustard, and other sauces readily available.

Technically, once everything is thrown on your sandwich, it becomes a x-tudo.

The name podrão refers to the fact that eating such a large, street-side, fast-made food item with so many extras (and from whatever cart or truck is nearest at the time) is probably not the most healthy of choices.

Nonetheless, I once discovered a nonchalant (as many of these places are) spot with a bacon podrão that would tempt me in all manner of weather (a few times, I walked in the pouring rain without an umbrella just to get some).

The seating these places offer is usually where you can find it (if you aren’t already “on the go”), but I’d discover there was usually at least a stool lying around, somewhere near the omnipresent television playing novelas next to it.

It was with a heavy heart (I almost want to say “literally”) that I learned to avoid them, at least in the months approaching summertime. If, however, you’re less consumed with keeping fit and you want to try something new, the podrão is a classic in Brazilian fast food.

Especially if you are in Rio de Janeiro, I highly recommend this class! You don´t have to fight traffic to get to class, your teacher will show up on time, you can make your own schedule, and the ma… END_OF_DOCUMENT_TOKEN_TO_BE_REPLACED

Choosing to take classes at Street Smart Brazil was the best decision that I’ve made since deciding to learn Portuguese.  My classes are going very well. Every week my instructor gives me more challe… END_OF_DOCUMENT_TOKEN_TO_BE_REPLACED