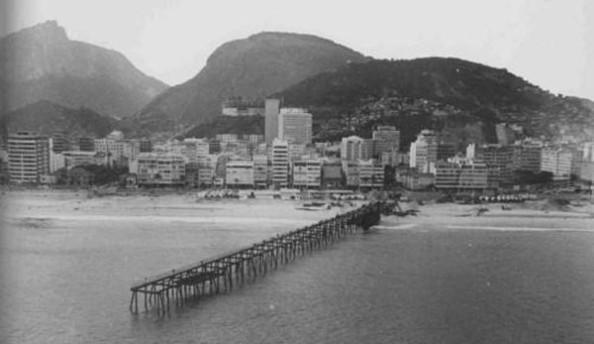 In 1968, the government of the then-State of Guanabara made plans to build a pipeline in Rio, to have sewage taken out into the ocean, far away from the coastline. As part of the process, they had to build a pier on Posto 9 in Ipanema. Its construction made for the best waves in all of Rio, because it created an artificial sea floor and because all the pillars on either side had steel plates alongside them, preventing sand from crossing from one side of the pier to the other. Both factors made for great surfing.

As it became the place to be for surfers, who migrated there from “Arpex” (the surfing nickname of Arpoador) and, following them, were artists, actors, musicians, poets, writers, hippies, homeless, and intellectuals. During the military dictatorship and the so-called “Anos de Chumbo”, that lasted until 1985, the urban youth saw the area around the pier as a place of free expression and learned to coexist. On the surfing side, the pier was the stage for the 1972 Carioca Surf Championship which started surf culture in Brazil, and brought the diversity of visitors cited above. Among them were Caetano Veloso, Gilberto Gil, Gal Costa, Raul Seixas, Fernando Gabeira, and even Paulo Coelho. Gal Costa went there so often they often called the area near the pier “Gal’s Dunes” (as dunas da Gal).

Sometime before 1975, less than 5 years after construction to build it stopped, it was taken down for reasons I can’t seem to find anywhere. I’ll leave you with a short interview (with English subtitles) with someone who lived the experience of the Pier.

PS – If you go straight to the beach from Rua Teixeira de Melo, you might just find what’s left of some old, rusted pillars from the pier.

Brazilian Culture: Cacuriá – When you think the party is over in Brazil

After studying abroad and living in Brazil I use Street Smart Brazil to keep up my Brazilian Portuguese. It is not just a tutoring service but a community. Constantly keeping it fresh with new ways o… END_OF_DOCUMENT_TOKEN_TO_BE_REPLACED

The quality of the instruction is outstanding. The instructors are flexible to schedule classes in times which are convenient. Being able to use SKYPE for face to face without traveling place to plac… END_OF_DOCUMENT_TOKEN_TO_BE_REPLACED

I can highly recommend learning Portuguese with Street Smart Brazil. I have very good tutoring. My teacher is competent and nice. Her classes are great and she challenges me every single time in a ver… END_OF_DOCUMENT_TOKEN_TO_BE_REPLACED