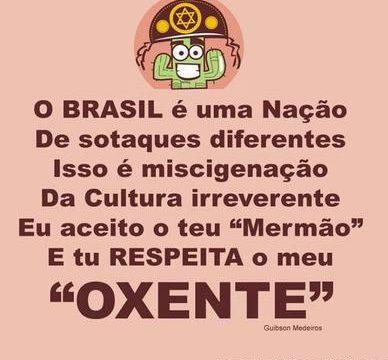 One thing that has always surprised me about Brazil is the number of accents one can find from region to region and state to state. It often feels obligatory, among Brazilians, to mention certain regionalisms when being introduced in a social setting to someone from elsewhere in Brazil. The differences especially enter the conversation when it's found out that someone is from Southern Brazil, Rio, Bahia and, at times, São Paulo.

While each region is rich with many strange and interesting phrases, there are certain set phrases that are virtually inescapable when talking about the parts of the country I just mentioned. Here in Portugal, when people in a social setting find out that I talk "Brazilian", they often emphatically say "E aí, galera?!!", which is proceeded by everyone else having a little laugh.

Personally, I like to mix it all up depending on the circumstance and my mood. In some moments, you might catch me letting out an "égua!" (Pará), an "oxe!" (Bahia, Northeast), or a "maneiro" (Rio), among others. When meeting others, though, I usually skip poking fun at their regionalisms as I find them all too interesting to think some are better or worse (it's when they're considered of lower status that the jokes often come out). The truth, however, is that everyone has an accent and every region has their linguistic peculiarities.

Anyways, I've spent a good amount of time looking through Youtube for Brazilian videos on regional accents, as well as any other accent-related videos that caught my attention. Check them all out below!

Some differences between the Carioca accent and the São Paulo accent.

A report on the Gaúcho accents from the South of Brazil

A report on the "Bahian Dictionary"

The story of a Brazilian who has Foreign Accent Syndrome, making him sound like a "gringo".

Actor Ricardo Pereira is actually really good at doing a Carioca accent, though you can notice a few R words, such as realmente, where he makes them guttural (like they do here in Portugal). Also, at minute 1:00, Ricardo says “por que que se chama” in his own accent (though in Portugal, he’d say chama-se), but other than that, it’s not noticeable that he’s a foreigner.

Brazilians at the Mormon BYU in Utah, and Americans that are learning Portuguese there. At the end they even give the national hymn a try.

Brazilian Culture: Why We Call our Bread Pão Francês

Pronunciation of the Letter D in Brazilian Portuguese

I am really happy that I chose Street Smart Brazil to learn Brazilian Portuguese. My teacher is fantastic and I am always looking forward to my next lesson. I am very impressed of the amount of mater… END_OF_DOCUMENT_TOKEN_TO_BE_REPLACED

I think Street Smart Brazil and all its services are great. It allows me to do schedule my classes from home when I have time in my busy work week. I am so grateful for this as otherwise I simply wou… END_OF_DOCUMENT_TOKEN_TO_BE_REPLACED

The quality of the instruction is outstanding. The instructors are flexible to schedule classes in times which are convenient. Being able to use SKYPE for face to face without traveling place to plac… END_OF_DOCUMENT_TOKEN_TO_BE_REPLACED

Street Smart Brazil impressed me with the structure and outgoing personalities! I was able to learn the language 2 months before I went to Brazil and I can say it was because of Street Smart Brazil. … END_OF_DOCUMENT_TOKEN_TO_BE_REPLACED