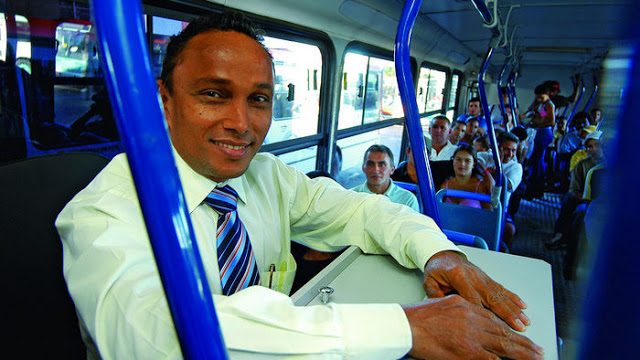 If you’ve been to Brazil, it’s likely you’ve taken a bus. If so, you’ve met the cobrador, or fare-taker. The position provides employment for as many fare-takers as there are bus drivers in the country, but the real question is: are they necessary? Both sides have been debated for at least the last several years (maybe even longer).

Those who are pro-cobrador say it’s safer to have a separate person dealing with the money, so that the bus driver can focus on driving and keeping the schedule. As I also mentioned, with virtually every Brazilian city employing people as fare-takers, it carries with it the obvious advantage of bringing an income to more families.

People who are against having cobradores say the country needs to “get with the times” and install electronic means of taking a cash fare (like in the US). Most Brazilian buses these days actually have a card reader for passengers who pre-pay, or who get a discount due to age, profession or disability. In some capital cities like São Paulo, the percentage of people paying fares in cash is so astonishingly low that those against the profession are starting to make a stronger argument for their cause.

Which is better in your opinion?

The “Samba Song” that’s not a Song

I really like studying with Street Smart Brazil. The quality of instruction and materials that Street Smart Brazil provides exceeds any I have received elsewhere. I actually look forward to it every w… END_OF_DOCUMENT_TOKEN_TO_BE_REPLACED

I am really enjoying my lessons. My teacher is so patient with me which really puts my nerves at ease as I struggle a lot with confidence. I feel already more and more comfortable and confident speaki… END_OF_DOCUMENT_TOKEN_TO_BE_REPLACED

A fantastic way to learn rapidly while having fun.  I took two sets of classes with Street Smart Brazil and was really impressed with the quality of teaching; from the informative handouts to the sch… END_OF_DOCUMENT_TOKEN_TO_BE_REPLACED