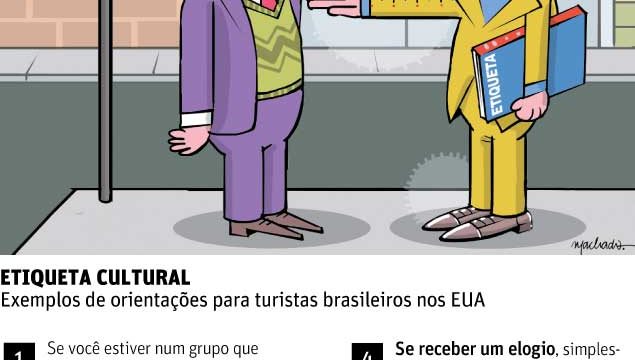 The Brazilian bank Caixa Econômica (Federal) released an etiquette guide for Brazilians living in the US explaining how one should behave when dealing with Americans. Once the Folha de São Paulo newspaper caught wind of it and wrote about the manual, Caixa promptly removed it from their own site. No matter, though, as the image survived (as you can see above).

A Folha reader left a comment adding to the list, saying “don’t greet someone with hugs and kisses, if you accidentally bump into someone say “excuse me” or “sorry”, never forget to add a tip when you dine out, and always ask someone how they prefer to be addressed.” With all but the last of the reader’s suggestions, I agree. Personally, I’ve never asked anyone in the US how they would like to be called. To each their own, I guess.

Paraphrasing, Caixa’s guide lists things like, “don’t speak in other languages around Americans”, “keep your clothes and shoes always clean and looking nice”, “stand at least 33 cm from someone when talking to them”, “don’t come late to parties and dinners”, and “don’t use rude gestures or speech when signaling an employee.”

As for why Caixa saw it fit to offer such a hand-out, I’m not sure, but I find it funny that banks are telling people how to behave. The manual, by the way, was found on their international page next to information on sending remittances to Brazil. Money transfers make up the second largest financial inflow to developing nations, behind international aid, according to Wikipedia. It’s big business, accounting for over 66 billion dollars entering Latin American countries from abroad, based on 2007 numbers.

I’m not one for guides and manuals on behavior, though I do find cultural differences in manners to be an interesting subject. I’m sure we’ve all heard that in one culture or another, there’s some sort of custom where burping after a meal is considered a sign of being pleased (or was it a way to say thanks? I digress). As long as one acts in good will, I see no reason to find offence when observing a foreigner acting differently.

Street Smart Brazil and their instructors have proven themselves to be patient, smart, helpful, and true professionals in their craft. Learning a new language for me has been one of the most challen… END_OF_DOCUMENT_TOKEN_TO_BE_REPLACED

I’ve really been enjoying the classes and I’m learning a lot. The classes have motivated me to learn more and more! This is my first time taking classes via Skype – and I’m enjoying the convenience an… END_OF_DOCUMENT_TOKEN_TO_BE_REPLACED

Loved the experience. All the material I have learned I have not lost. I continue using my Brazilian Portuguese on a daily basis. I continue to discover more on my own through literature, music, film,… END_OF_DOCUMENT_TOKEN_TO_BE_REPLACED