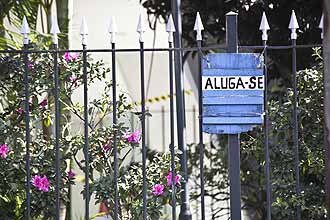 For the last month, I’ve been on the lookout for rooms to rent at a reasonable price. Finding that middle ground is tough, especially when most people rent out their rooms for prices that are crazy-high or suspiciously-low. Living in Niterói, across the bay from Rio, should have its perks, in that it’s just far enough away to offer lower rent. Not so, I find.

Scouring over the half dozen rental sites, plus a few social networking sites, I see prices set at R$1,000 per month or more. Ok, so sometimes it’s a little less but not by much. On the sites, most renters require me to be a female, though I seem to be missing a chromosome for that. The same sites almost always ask for people who study or work outside the residence, which creates a problem for me since Brazil doesn’t have the kind of work-from-a-cafe culture that the US has…and I work from my laptop.

On the social sites I check, ads are placed every few days (or at least once a week), yet no one lists the price they are asking. I can’t make heads or tails of this practice because the price point is, um, kind of important. In frustration, I started my own practice of asking “how much?” on every ad, to know for the sake of knowing but also to make a point. Perhaps it’s like jelly beans in a jar. I just need to make a guess and if I’m correct they’ll rent it to me for free or at least for that price. For the few that do respond, they inevitably throw the R$1,000 price at me.

No matter what the price, there’s always extra costs to be added on. Sometimes that cost is entirely expected (gas, electricity, water) and other times it’s a surprise to the unsuspecting foreigner (the “condomínio” tax). Roughly-speaking, the condo tax is to pay for the security guard and the building’s upkeep, while potentially increasing the cost of renting by a hundred or two hundred reais. For example, if renting an apartment is R$500 (good luck in a big city), the condo tax is almost R$300.

The best way to beat the system (ie, the high price points) is to live at least an hour or two outside the big city or to move to a less popular big city…basically, to move out of Rio or São Paulo and go elsewhere. In my search, I found many room rentals in two capital cities, Belo Horizonte and Salvador, for between R$200 and R$450 per month. From living 2 hours outside of Rio once, as well as in Belém, I can say that is on par with what I paid previously. So for everyone who thinks Brazil is automatically cheaper to live in, it really just depends. Sticking with the candy-themed analogy I made earlier, perhaps jelly beans have nothing to do with it. Renting here can be more like a box of chocolates.

The quality of the instruction is outstanding. The instructors are flexible to schedule classes in times which are convenient. Being able to use SKYPE for face to face without traveling place to plac… END_OF_DOCUMENT_TOKEN_TO_BE_REPLACED

Learning a new language can be one of the most challenging things you can do. The individualized and wholly personal tact of teaching at Street Smart Brazil makes it a challenge that you will want to … END_OF_DOCUMENT_TOKEN_TO_BE_REPLACED

I’ve been extremely happy with my classes through your program. My instructor is great and very good at formulating lessons which are challenging but also accessible for a beginner like me. She’s also… END_OF_DOCUMENT_TOKEN_TO_BE_REPLACED