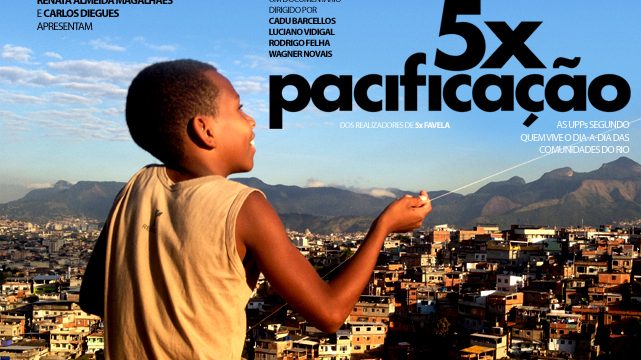 There’s a famous black and white film from the early 1960s that showed Rio de Janeiro in five vignettes, each done by a different director about the favelas and its residents. It was called Cinco Vezes Favela (the full movie is below).

With all the attention the favelas have been getting since 2008 when José Mariano Beltrame took his position as Rio state’s secretary of public safety, the film got a refresh in 2010. This time it was simply called 5x Favela (full movie below) and used favela residents as its principal actors.

Fast forward another two years to mid-November 2012 and the film has now earned a spin-off: 5x Pacificação (trailer below). The new drama looks to show the pacification process headed by Beltrame’s UPP (Pacifying Police Force) and how they are viewed from the inside out.

The first vignette, “Morro“ shows the difference between communities that already have UPPs installed and those who have yet to receive them. Part two, called “Polícia” shows the preparation of the new police units, followed by part three, “Bandidos”, that depicts ex-traffickers and how they have tried to reintegrate into society. Part four, titled “Asfalto”, is about how people living near these favelas feel about the UPPs while the final vignette, called “Complexo”, relates to the pacification of both Complexo do Alemão and Favela da Rocinha.

I am really enjoying my lessons. My teacher is so patient with me which really puts my nerves at ease as I struggle a lot with confidence. I feel already more and more comfortable and confident speaki… END_OF_DOCUMENT_TOKEN_TO_BE_REPLACED

Streetsmart Brazil has great teachers. They are interested in creating a learning experience that I look forward to every week. I’ve progressed and become comfortable with my use and understanding of… END_OF_DOCUMENT_TOKEN_TO_BE_REPLACED

The web class is a unique setup. When I first heard about it I thought it would be too weird to try to do something so personal and interactive as a foreign language online. Now I am sort of devotee. … END_OF_DOCUMENT_TOKEN_TO_BE_REPLACED

I am really happy that I chose Street Smart Brazil to learn Brazilian Portuguese. My teacher is fantastic and I am always looking forward to my next lesson. I am very impressed of the amount of mater… END_OF_DOCUMENT_TOKEN_TO_BE_REPLACED